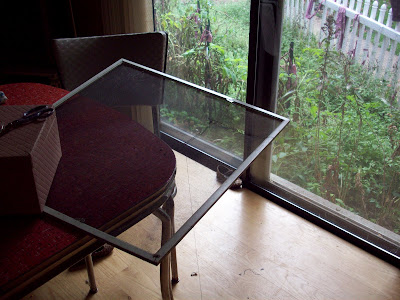 While Baby took a nap, I sewed up the screen I had to rip open when we got locked out of the house.

My mom told me that my Grandmother got locked out of the house pretty often and several of her screens had circles cut out and then sewed back on. She finally took to pinning a spare key inside of her bra. She also folded her money into a hankie and pinned that to her bra, too. She didn't like to use a purse. Now I know where I get that from-- I'm anti-purse! 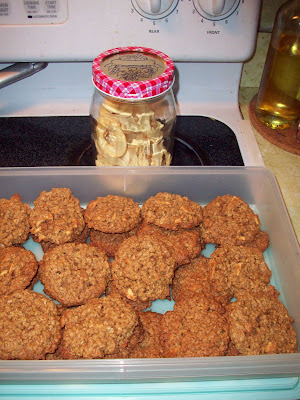 Baby took a long enough nap that I was able to make oatmeal cookies-- my favorite! Instead of raisins or dried cranberries, I added a cup of chopped, dried apples. So good and good for you! 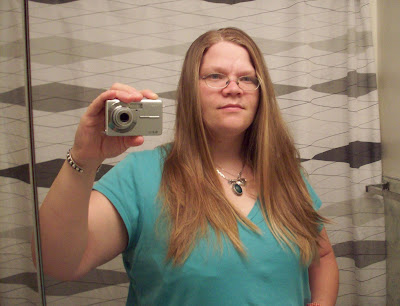 My long hair has been driving me crazy. It's the longest I have ever had it and while I was pregnant, I had it down all the time-- unusual for me not to have it up. I'm guessing it was the hormones that made me love my healthy hair. Now that my hormones are pretty much back to normal, my hair is falling out in clumps, I suspect it is also because of the length and weight of the hair. I'm finding hair all over the place and more than once I've pulled out a long hair from the meal I am making-- ugh! 99% of the time, it's up in a pony tail and I simply can't stand it anymore. 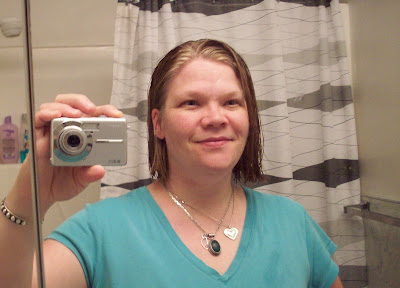 Ahh! Much better! I put my hair in a low ponytail, and asked my husband to cut it for me. It ended up a little shorter than I expected, but I'm happy with it. We'll see how it looks in the morning when my hair is dry. I actually weighed myself before and after and I lost a pound of hair!! Good grief! That's some heavy hair.

Labels: cooking, day in pictures, me

this made me laugh and smile. Perfect ending to a much too long and tiring day...thank you! You look adorable. Isn't it crazy how much lighter you feel?! I will say however my hair is still falling out in clump but it it nice that they are much shorter hairs:)

Yummy! Those cookies look delicious... I wonder, would you care to share that recipe with the rest of us? :)

Love reading your blog, by the way. Very useful tidbits here and there.

You look GREAT with a haircut! :o)

You look amazing. Please can I have the recipe for dried apples?

Summer-- It does feel so much lighter now. At night, if I didn't have my hair up, it was such a big production turning over and having to flip my hair over to he oher side. I still have that fresh-cut look, and as soon as it "settles down", I'll post a pix of my new 'do!

Karen-- Thank you! Feels great, too!

Dj-- Thank you honey! We are buying more apples tomorrow, so I am going to make more dried apples. I'll post the how-to soon! xo

You look 10 years younger! 'Love the "new you". This will put more spring in your step!

I have a very old recipe that came out of my mother's "Spry" cookbook. I don't imagine any of you are old enough to remember "Spry"! Anyway this recipe calls for sour milk, which I created adding a little vinegar to the milk and letting it set for awhile. I still have that recipe to this day and they are very chewy!

I like to buy the already chopped up raisins that they have now, all you need to do is squeeze them out of the package!