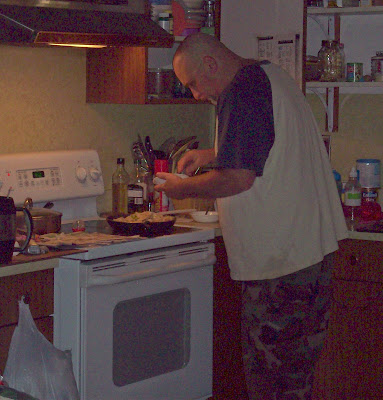 Gotta love a man that knows his way around a kitchen. Hubby is making hash browns with onions and green peppers from scratch-- so good! When we were first dating, he bragged that he made a mean Beef Stroganoff. His work area was having a Christmas potluck and he said he would bring me a sample of his dish. I expected a small spoonful on a plate, but what he brought me was a plate overflowing with all sorts of food plus his Beef stroganoff taking center stage in the middle of the plate. He made it from scratch and it was absolutely yummy. Like me, he liked to hang out in the kitchen with his mom and later, he was a cook in the Navy. I scored with this one! :o) 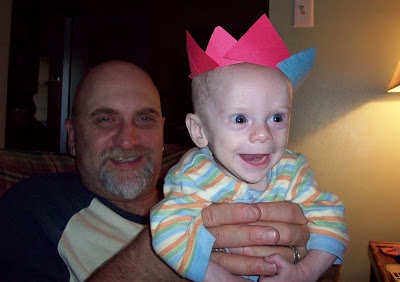 The girls were having a crafty moment and made a crown for the Baby. Looks like he was having fun being a prince, too!

Today was an ordinary day-- laundry, playtime, cleaning and cooking. I don't usually take pictures of everyday activities, but now as I type this, I think I should. Everyday moments are a big part of our lives and I want to be able to remember those times, too.

How cute the baby looks with the crown on his head :D

Your DH has very exciting and expressive eyes. He looks like a happy man!

My sons all cook but I have never been fortunate enough to have a husband who does so. You are soo lucky!

Yum yum! (On my license plate!)

You are a lucky girl! Now you have two great guys - love those smiles :)

I'm also lucky to have a wonderful husband who knows how to cook and do dishes.

Yup, you're a lucky one! Baby looks v cute with the crown - look how big his Dad's hands look compared to him! That's one for him to go 'wow' over when he's older!

Lantana-- That was one of the things that attracted me to Hubby-- his eyes and his facial expressions. You know as a deaf person, we really rely on those facial movements and he does those really well! Your license plate says "yum yum"? Really? How fun! :o) Good for you to teach your boys how to cook. We are teaching our kids everything we know!

Lisa-- oh yes, getting someone else to do the dishes is always a bonus!! lol!

Sparx-- I stare at the hands, too. Such a tiny boy and I know it won't be long before he'll be bigger than his sisters! :o)