Most of the day was spent outdoors. It was a lovely fall day, crisp and cool, not cold enough to turn on the heat, but nippy enough to turn my fingers into popsicles when I hung the laundry on the line this morning. 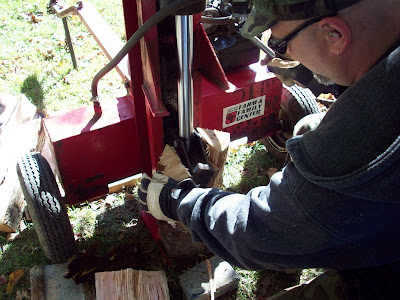 Hubby worked on splitting the logs today. I helped when I could, but he did the majority of the work. Here he is, setting up a log under the splitter, then he presses a lever to make the splitter head come down... ...it splits right in half! It makes quick work out of even the largest log and in no time at all, Hubby had a nice pile of firewood. 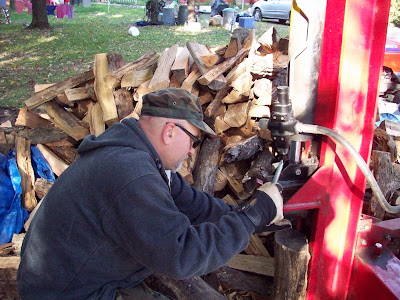 Hubby is still at it 3 hours later and look at that pile of firewood behind him. If he was using his axe like he did last year, this pile would have taken more than a week to chop, and I'd be missing his help inside the house. 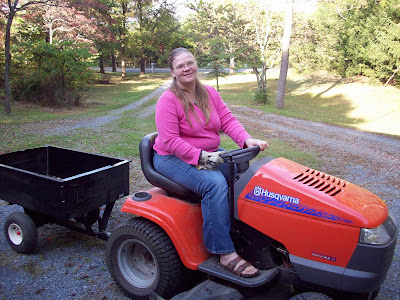 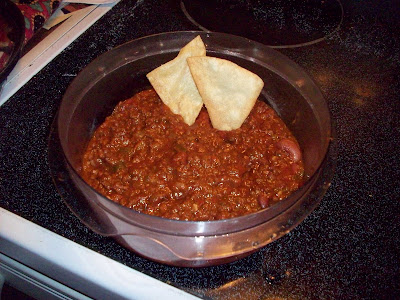 Smart me, I had chili going in the crockpot all day. Every time we came inside the house, the smell of chili just about made us crazy! I'm glad I didn't have to cook after being outside most of the day! I did make up some fresh corn chips and corn bread, because what's chili without corn bread?? This bowl is all that's left from a big crockpot of chili! 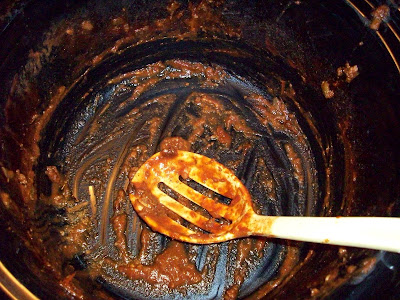 The crock pot after dinner! We sure worked up an appetite! 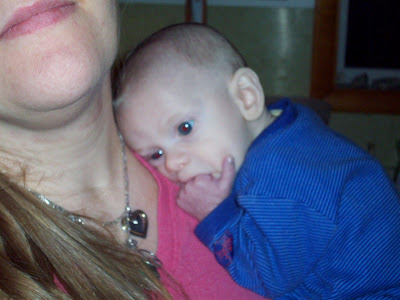 I took the Baby in for a check up and he is gaining and growing.. He now weighs 9.2 lbs and is 22 3/4 inches. He has discovered his fingers and contentedly sucks on them. Since he found them, he has been much easier to put down for a nap and he soothes himself to sleep. None of the girls sucked their thumbs or fingers and we don't use pacifiers. I was a thumb sucker and when I was little, I called it "thucking my thumb", of course, that's how it sounds when you say it while your thumb is in your mouth.

I like the pix of Baby resting contentedly on your chest...

Log splitters are a life (and arm) saver! I have one that lays down, not stands up, and I couldn't do without it!

i made stew for the first time this season, but didn't get to it fast enough to do it in the crockpot, so the oven it was!!

Your boy is a sweety! I know you have been hassled about his weight gain, but I did have to giggle a bit! My girls were 10 pounds and 9 1/2 pounds respectively at birth!! Now they are both tall and slender, so it just proves that birth weight isn't everything in life!!

I love viewing baby pictures.
My dad has a wood splitter. My brothers and I spent all day splitting logs in the early 1990's for our dad the day before his surgery and when we were running behind, we had to "steal" another splitter from one of his friends so we were able to finish splitting more logs. We often helped him whenever he needed it. It was fun. One of the day I ripped the muscle from my right elbow after it had been stuck between the bones for weeks and had to have the surgery.

I just love it when the babies learn how to self comfort. They are just so much happier when that happens. Congrats on getting past the CPS mess and getting him to grow! Hopefully when you find a more compassionate doctor (who is willing to LISTEN to you) he or she will agree that baby is doing just fine.

Karen-- me too! It's a sweet picture.

Lisa-- this log splitter can go either way, horizontal or vertical. Vertical saves us from lifting a heavy log.

You have made some big babies!! The first 3 babies were all 8.5 and up and I expected #4 to be the same, but since the doc broke my water before it was time, I think that's why he was smaller. He is doing great though and he feels heavier every day! He definetely fills out his clothes better!

Lisa-- ouch! Sorry about your arm! *shudder* I'll be sure to be careful when I work the wood with Hubby.

K.l.-- It does make life a little easier when babies self-comfort. Thanks for the congrats. I'm happy about it and I sure hope this will be the last we have to deal with them. Haven't found another doc yet, still looking...

OK, forget the rest of the post, that last pic says mountains, hey? So sweet.