Peter and The Strawberries

Peter thinks he's so sneaky.
He swiped a box of strawberries from the fridge after I told him, "no, we're eating lunch soon."
He knows I cannot hear him sneak behind me and open the fridge.
He thinks if he grabs it and runs away quick enough and I don't see him, he's in the clear.
Good thing he doesn't know I can feel the vibrations of his feet and recognize the difference between walking steps and running steps.
I go and investigate. 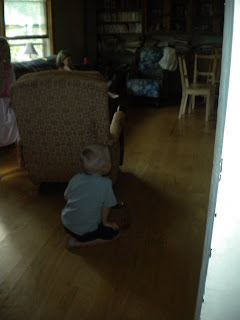 He's watching for me, expecting me to come from the other entrance.
He doesn't hear me sneaking up on him! 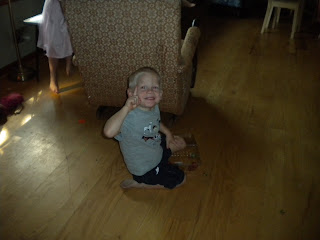 "There you are!" I say.
"Ahhh!" he screams and jumps, startled that I was behind him! 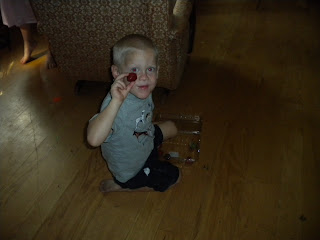 "Show mama what you got!" I ask him.
And there are the quickly disappearing strawberries!﻿
Posted by jenny at 10:50 PM

Can't see as I blame him...I love strawberries, too.

Cheyenne-- yes, me too! He goes through phases with fruits-- nothing but bananas, then all grapes, then only strawberries...