When the kids found out we were all going to the County Fair, the girls all wanted to make something to enter into the Fair.  I already had a project finished and ready to go, plus I had some jam and salsa to enter. The girls looked through my cookbooks for inspiration and they also embroidered pictures to enter. 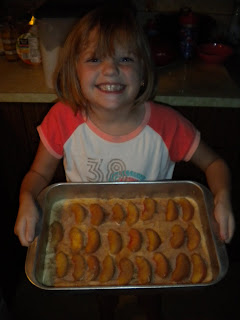 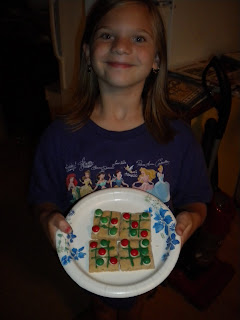 The day before the Fair, Gretchen made Peach Buckle and Evelyn made Tic-Tac-Toe cookies. 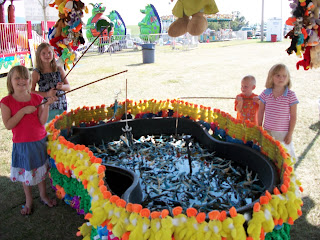 We got to the Fair really early to get our free tickets for entrance, meals, and rides. A little too early, since none of the rides or the games were open for at least another two hours, but we were able to look around and eat before the real action began. 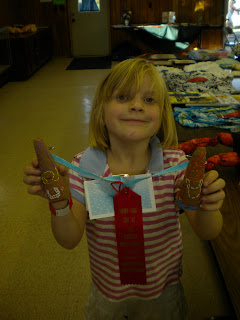 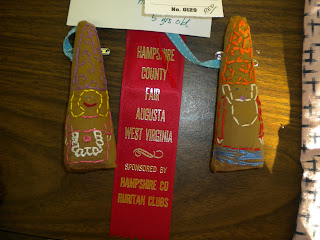 Sylvia made a pair of gnomes-- Mr. and Mrs. Gnome.  She embroidered them, I sewed them up, she stuffed them, then I sewed the holes shut. 2nd place! 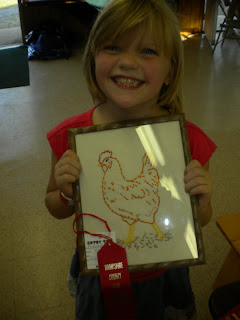 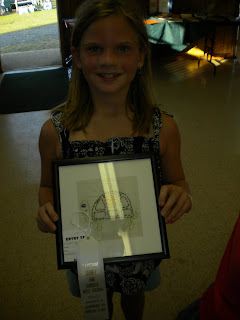 This was Gretchen's very first embroidery! I'm bursting at the seams at how all 3 of the girls like to embroider! Gretchen sewed up a Chicken and got 2nd place!  Evelyn sewed up a turtle with a flower in the shell and got 3rd place! 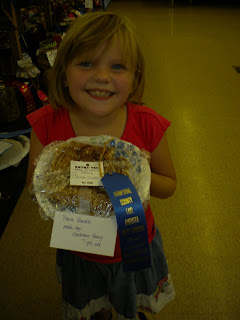 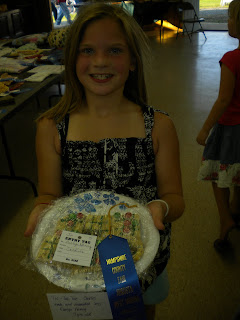 Both girls got 1st place for their baked goods! 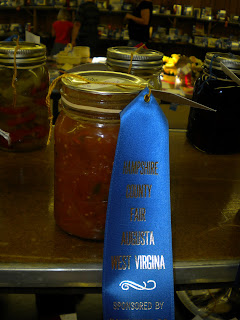 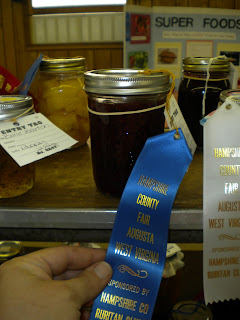 Both my Cherry Almond Jam and my Salsa got blue ribbons! 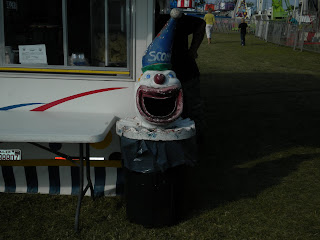 While we were eating, they had plain old trashcans placed between every other picnic table. Peter was being especially helpful and wanted to throw the trash away. He walked right by the trashcan closest to us and kept on going, going, going all the way to the clown trashcan a good distance away. Can't say I blame him, I think it's more fun to throw stuff into a clown trashcan, too!
We had a good time. The nice thing about getting there early was being able to get ahead of the crowds. After about 3 or 4 hours of walking around, going on the kiddie rides and constantly staying on top of 'Runaway Peter', we'd had enough and were ready to head home. It was just starting to get dark and the teens were getting wild and crazy, cutting in front of the little kids and I was so done with that. Time to go.
﻿
﻿ 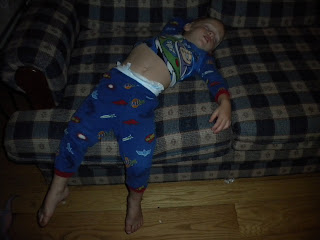 It was easy to get the kids in bed that night!
Posted by jenny at 7:40 AM

Congratulations to all the ribbon winners. It's great that they all want to participate and then get rewarded.
I love the picture of little Peter at the end. I guess they were all fairly tired. My husband and I went to our county fair and walked for 5 hours and I know how tired I was when I climbed into the truck to come home.

Cheyenne-- I was also hobbling on a sprained ankle that day, so my ankle was screaming by the time we got back in the car. Day before, we were picking pears and I fell off the ladder and landed hard on my heel. It was good that we were there early and Peter had a little bit of freedom to run around a bit while there were few people, as it got more crowded, it was harder to keep him in check. All in all, though, it was a good day!