Now that the kids are getting older, we're breaking out some of the games that require more than climbing ladders and sliding down chutes. We have longed for the day we can gather around the table and play games that we remember playing with our own families growing up. 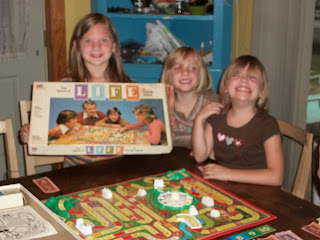 We recently played LIFE with the girls and they love it!
We're skipping over some of the complicated bits, like getting insurance and stocks, but otherwise, playing the game as usual. They get especially pleased when they get married and they plot how to get the wheel to stop on a certain number so they can have children.

We usually have to set Peter up with some toys or put a movie in for him, or else he gets into a screaming fit and starts swiping every one's money, which gets the girls screaming, which gets me screaming. ahem.  Anyway, it's pretty fun to watch how the girls arrange the "people" in their cars.  As soon as Gretchen gets married, she puts her husband in the driver's seat.
﻿
﻿Gretchen loves the money!  She could have eight 100,000 bills, but if she has no other bills, she thinks she's so poor and cries that she has no money. She's only happy when she has several bills of each color. Silly girl!
We've played this quite a few times, and I think they're ready for a game of Monopoly soon.
All of our games are older, either mine from when I was a kid, or Andrew's from his childhood, or games we pick up from yard sales and thrift shops. We like the older games better. The girls recently played LIFE at a friend's house with a newer game set, and my girls complained it wasn't the same as ours. I just told them that we had an older game and sometimes the manufacturers update the games and make them look different.
Do you have memories of a certain game and remember how much fun it was, then play it again as an adult and it's the most boring game ever??  My husband and I both have a game like that in our past.  His is Mousetrap and mine is a game called Mystery Mansion. I'd never played Mousetrap before and he went on and on about how much fun it was, so we bought a new game and started playing it and I kept waiting for the fun part to start. He looked at me sheepishly and admitted it wasn't as fun as he remembered it. My sister and I spent hours, hours! playing Mystery Mansion. You built the mansion as you go along, looking for secret passageways and treasure. Sometimes you'd find a chest and it would have just cobwebs in it, or the secret passageway would take you down to the scary dungeon. I couldn't wait to show Andrew how to play this super fun game and then when I broke it out and we started playing it, I realized it was our imaginations that made this game so much fun. I'll give it to the girls and see if they like playing it and hopefully their imaginations will make Mystery Mansion as much fun for them as it used to be for me.
Posted by jenny at 7:28 AM

Aw, this is so lovely! Family Game Nights are a dying tradition, it's so sad! There's no better way to spend quality time with the most important people in your life…we recently started doing a monthly Neighborhood Family Game Night; the first week of every month, all the families in the neighborhood get together (we rotate houses, and the host house provides dinner!), we play team board games like Pictionary and Cranium and Twister, have lottery wheels with small prizes, and set up a projector to watch movies! It's a great way to get to know the families in the neighborhood, make new friends, welcome newcomers to the neighborhood, and spend a fun night with your family! :)