Well, that was fast. Gretchen went from single tooth gap to... 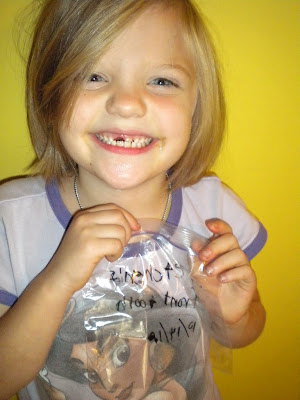 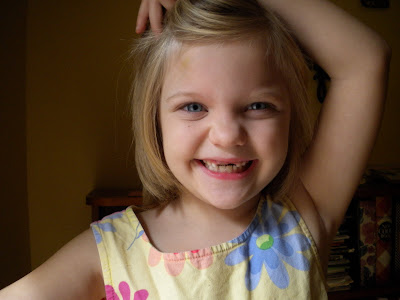 taken 10/26/10
We have Peter to thank for that. They were scuffling over who gets to sit in the recliner and Peter's foot somehow ended up in her mouth and bumped her tooth loose. Blood everywhere, which made me think it was something horrible-- like a split lip. After cleaning off the blood, there was her tooth, hanging by a little piece of skin. Plucked it off and ta-daa!!
Bad tooth fairy forgot to put money under the pillow (again!) and after a quick call to 1-800-Tooth-Fairy, she found $2 under her pillow after breakfast.
***

We're going trick or treating at the mall tonight. I thought it was on Saturday and planned to work on their costumes today, then I checked online and found out it was tonight! Ack! After a quick scramble, I made Evelyn's costume last night. Sylvia is wearing Gretchen's super girl costume from last year, Peter is wearing the costume I made for the renaissance festival that we never did go to, and Gretchen is wearing a renaissance princess costume that I bought for Evelyn when she was 4. Thank goodness for not buying cheap-o costumes that rip the first time they get used. I had to hem the princess costume 4 years ago, when Evelyn wore it, and now, 4 years later, after I let down the hem, it fits 6-almost-7-Gretchen perfectly!
(pictures coming next post!)

Wow! Your daughter's so cute! I still love her smile even if two teeth were gone. My son lost one tooth just yesterday. And like your daughter, he's still happy because he knew that he will get a reward from his tooth fairy and the Libertyville dentists will definitely takeover of my son's dental care. Good job also for us moms in encouraging and motivating our kids!