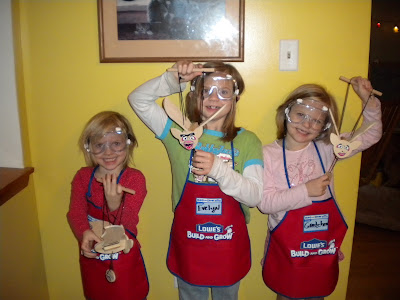 Did you know that Lowe's hosts workshops for kids? Home Depot does, too. I knew about it, but never had the chance to go-- always something coming up to prevent us from going, you know, the usual family of 6 happenings. I happened to read somewhere that Lowe's was having a bat workshop for the kids and since we are big lovers of all things Halloween and a bat would fit right in, I signed the girls up. Andrew had to work that day, but I was determined to go anyway, making sure my Mom would come along and help with Peter.

They had a great time!! They got free aprons and protective eye gear, and a patch after they were done building their bats to sew on the aprons. It was difficult at first when Peter was between my legs and grabbing stuff from the kits, and then Mom buckled Peter into a cart and wheeled him away screaming. Once out of sight of me, he calmed down and Mom cleverly took him to the halloween/christmas displays to make him happy. Meanwhile, I was able to better focus on helping the girls and I realized I had "helped" them hammer on all the bat wings backwards! Oops! So I had to undo my mistake and then correct them. Would have been done sooner if not for that, but we were there about an hour.

We'll definitely go again, the next workshop is periscopes!! I loved those as a kid!
Posted by jenny at 10:15 AM