Rocky and The Girls

I must admit, I never imagined I would enjoy chickens as much as I do. Except in books and on TV, I've never seen a chicken and my only encounter with real chickens has been on my plate. After reading multiple accounts of fellow bloggers having chickens, I started having chicken envy. I had the land and the space, I live in the country and in an area with no restrictions on chickens, so why not? Andrew has made it clear that the chickens are strictly my "project", but he does help me out with them and shuts the coop door at night when he is home.
-
I have been a chicken owner for a year and a half now, and there's no looking back. I thoroughly enjoy the chickens. I like watching them scratch through the yard, laugh at the way they run and flap their wings, enjoy the egg hunts when there are not as many eggs as there should be in the nest boxes, and this year, I got to see one of my hens raise her own chicks! I dream of having other breeds for a rainbow of chickens, but for now, I'm happy with what I have: Rhode Island Reds, Buff Orpingtons, Speckled Sussex, and New Hampshire Reds (though I have a hard time telling the Reds apart). 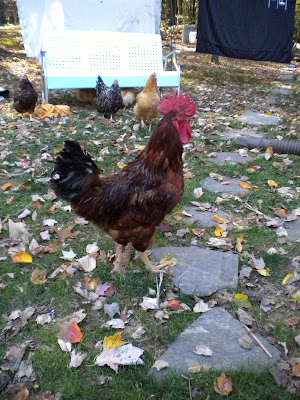 The lucky rooster: Rocky. He's man enough to do his job with his women, but nice enough he doesn't peck the humans. He's the one that's been a favorite with me and I intend on keeping him around for a good long time. 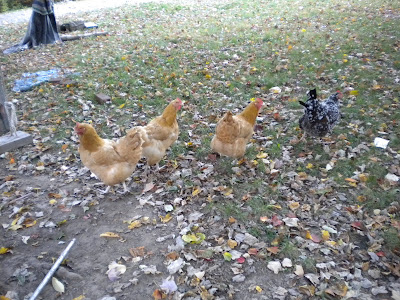 It's been so nice to see the Buffs and the Speckled Sussexs out of the coop again. They rarely came out when there were all those roosters, as they got jumped and gang-banged almost as soon as they took a step out of the coop, poor girls. I know animal life is different, but obviously they didn't like it if they cooped themselves up in the coop! They roam freely now, boss around the younger Red hens and come running when I call. Their life has definitely improved now that my freezer is full of chicken! 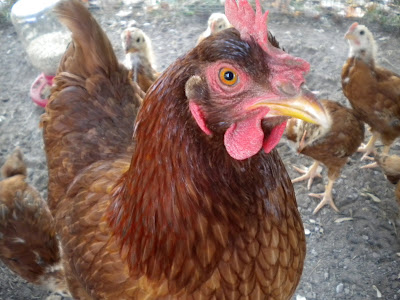 The good mama and her brood. I recently gave her and her babies freedom out of the pen and watched them closely. I worried Mama might take her babies back to her nest and I had no idea where it was. I needn't have worried. She took her babies on a tour all around the house and then stayed around the pen for most of the day, before retiring back into the cage at dark. Yesterday, I saw all the chicks hanging out in the coop, Mama was nowhere to be seen. I wondered if she tucked them in there and slipped away for a Mama-break? I wondered if I could get them to return to the coop at night and dismantle the pen? I took a chance and placed the cage inside the coop while the babies were in there. Mama came back for her babies later and they roamed the yard, and at night, to my delight, they nested in one of the nest boxes in the coop! I'll wait a couple of days before I dismantle the pen, but I think it's good to go. 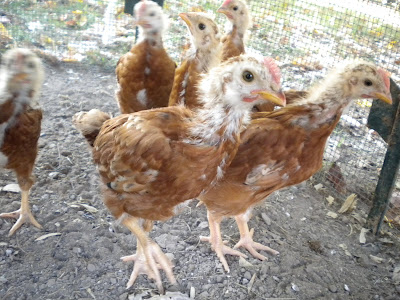 The babies, right before their release from the pen. They are one month old now, and just about lost all their fluff, only a little left on their heads. I'm hopeful that they'll survive the winter and when the temps drop, I'll turn on the heat lamp in the coop. Come Spring, I'll cull the young roosters so I don't get a repeat of what happened this summer-- cocky roosters, in more ways than one!
-

Since Mama is a Red, and all the roosters were Reds, the babies are all Reds, too. Don't ask me which-- Rhode Island or New Hampshire. The differences between the two reds are small, and I probably would be able to tell better if I had two hens, one of each breed. As it is, all the Red hens look exactly alike and all the roosters looked exactly alike. Since I know for a fact that Rocky is a Rhode Island Red, I assume all the roosters were Rhodes, too. As for the hens, they could all be Rhodes or all New Hampshires. I don't really care either way, they are beautiful chickens and I wanted a different breed from the Buffs and the Sussexs so I could tell the younger hens from the older ones. I'm thinking of leg bands for the babies, so I can tell them apart from the older Red hens.
-

If I order more hens next year (doubtful) or in later years, I plan to get a different breed, partly to diversify, also to be able to tell apart the older hens from the younger hens. I've seen some beautiful black hens, the name escapes me at the moment, and I'd like to try the traditional white hens, the kind my mom and dad grew up around.