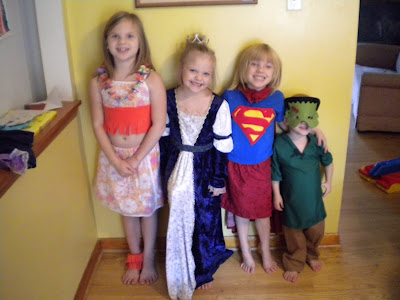 Here are the kids in their costumes:
Evelyn is a Hula Girl; Gretchen as a Renaissance Princess;
Sylvia is Super Girl; Peter as Frankenstein. 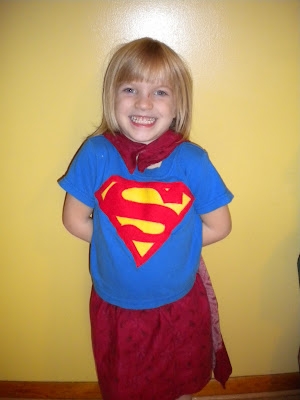 I got lucky when Sylvia said she wanted to wear Gretchen's Super Girl costume I made last year. One less costume to make. It was cold here, so she wore a red sweatshirt underneath when we went out. 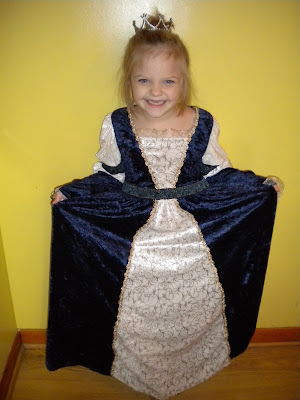 I've had this costume for awhile-- got it for Evelyn when she was 4 and I had to hem about 6 inches then. I'm so glad I didn't cut it and only sewed it up. They play dress-up with this a lot, along with some of the other play clothes we have. 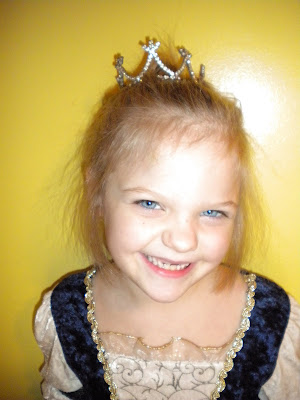 I scored some vintage crowns at a yard sale, and she was going to wear this one with her hair pulled up, but at the last minute, she decided she didn't like her hair up and wanted it down, so she switched to a heart crown.
They are great crowns-- made from metal with rhinestones, unlike the cheapo plastic ones they sell now. I found 3 of them and got them all for $1! 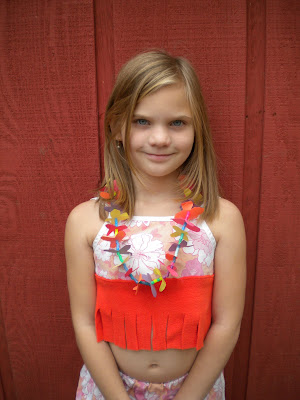 Evelyn as a Hula Girl. She made the lei herself from cut out construction paper flowers and beads. She worked one night on this and then said it was going to be her costume for Halloween. I had no idea she wanted to be a Hula Girl. Originally, I was going to make a "grass" skirt out of strips of fabric, but then I saw this dress in the rag pile. It's a size 4, way too small for Evelyn and it had some stains on it, which was why it was in the rag pile. I cannibalized it, cut off the top part, added elastic in the back and fleece all around for fringe (also for covering up her boobies as the top barely covered anything). The dress part was a faux wrap-around dress, so that was easy to take apart and sew the sides up, add elastic to the waist and ta-da! a skirt! 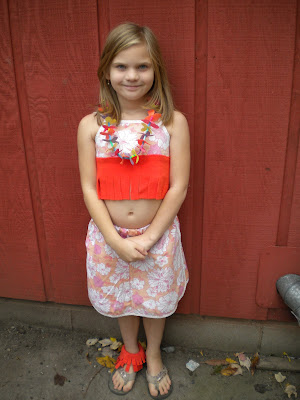 Then I took some fleece and made a little fringe anklet for her, since that's what Hula Girls wear!

My sewing machine decided to crap out on me in the middle of sewing the fleece on the top, so a lot of this was done by hand-cranking the needle. The grabber part of the sewing machine isn't working anymore, so I had to manually pull the fabric through. An easy costume to make, but made difficult with the stupid sewing machine. 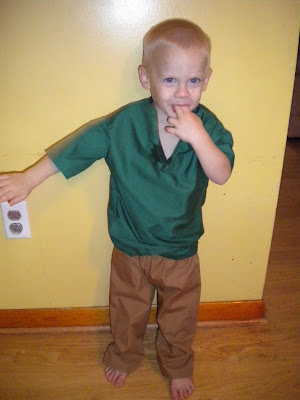 Peter's Renaissance Faire costume I made last month, when I thought we would go to the Faire. It's a Robin Hood costume, and I was going to make the hat to go with it, but never got around to it. I used a pair of his pants and a shirt for the basic pattern and pretty much winged the v-neck opening. Pretty good, if I may say so. 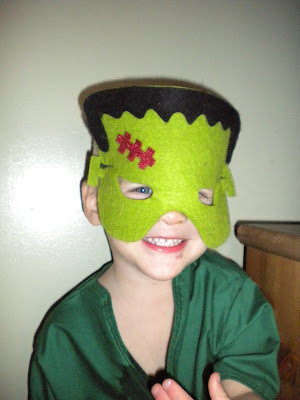 I spotted this Frankenstein mask in the dollar bin at Target, and it was too cute to resist. I knew it would go great with the Robin Hood outfit. It was hard enough trying to get a picture of Peter in this, and he barely wore it when we went trick-or-treating. Oh well. It'll go in the dress-up pile for the kids to play with. 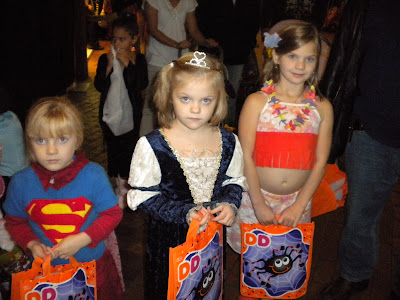 The mall was a madhouse! I couldn't believe how many people were there this year! Holy cow! 2 years ago was fun with the girls and Peter in the stroller, and lines moved fairly quickly and e completed the circuit in about 45 minutes. This year, ugh. Andrew and I are not big fans of crowds and though I have a bit more patience than Andrew, this was definitely trying. It doesn't help when people keep cutting in front of you and it took more than 45 minutes in line just to get 8 stores. By then, Peter was an angry squirmy thing trying to get out of our arms and we don't dare let him go because surely he'll get lost among all the costumed kids. I'm sorry, but I walked off with Peter in my arms and Andrew and the kids followed.

After a quick talk with Andrew, we explained to the kids that the mall was just too crowded for us to handle and if they were alright with it, we'd just buy them some candy instead. They seemed fine about it so we went out to eat then stopped at the store for candy. When we got home, we had a little trick-or-treating at home, with Grandma, Daddy and I in separate rooms and they got to knock and yell "Trick or Treat!".

Saturday morning, we went to the Library for pumpkin painting and I found out a church not too far from us was hosting a Trunk-or-Treat. We decided to take the kids there to make up for the mall and what fun that was! It was small-- maybe 15 cars there, but it was so nice. They decorated their cars, and dressed up in costumes and some of the treats weren't just candy-- they got boxes of crayons, christian-themed coloring books, pencils, stickers and tattoos, those popular rubber band bracelets and to top it off, hot chocolate with whipped cream! After we got home, we let the kids have another round of in-house trick-or-treating to wrap up the Halloween festivities. 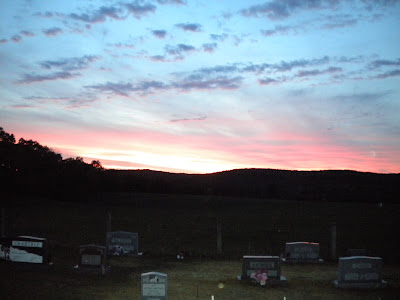 On the way home was the most gorgeous sunset I've seen in awhile. Pretty pinks and purples. I wanted to stop and take a picture, and by the time we stopped, it started to fade a little, but still pretty nonetheless. Of course we stopped at the cemetery just down the road from us for this! A fitting location for ending the day!

Such a cute post this is. I love the fact that after not being able to have fun at the mall that you guys ended up doing other things that were much better anyway. And the kids had such a great time, too. That's all that matters.