For months now, I've been trying to get my broody buff hen to hatch eggs. She'll sit on the eggs, move when another hen needs to lay an egg, then sit back on them until, at night, she joins the rest of her fellow chickens and roosts, leaving the eggs to chill and get cold. I've meant to "box" her in so she'll have no choice but to sit, but just haven't gotten around to it.
Meanwhile, the younger set of hens are laying eggs; one by the oil tank we never use anymore, another in the pole barn and another location in the woods I only just discovered today. When I close the coop door at night, there is always one hen missing. She never goes in the coop at night, though I see her during the day. I don't know where she goes at night, I'm so busy I never get to just sit and watch where she goes, so as long as I see her the next day, she must be roosting somewhere safely.
Imagine my surprise this morning when Gretchen yells, "Baby chicks! Baby chicks! Look! Baby chicks!" Looking out the dining room window, there's my missing hen with 9 little babies! 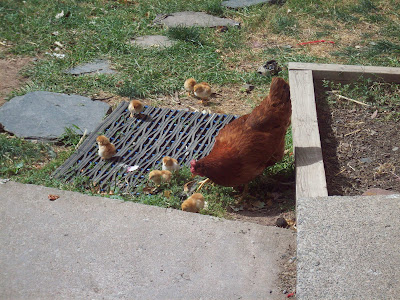 They were obviously born recently, some of them were still wobbly and all still have their egg "tooth". 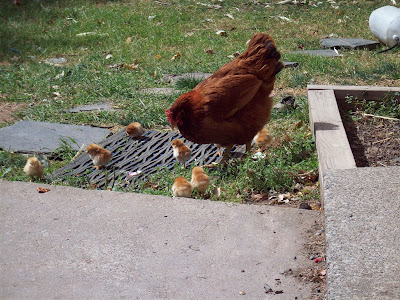 Mama Hen was doing good, teaching them to scratch and peck for food. 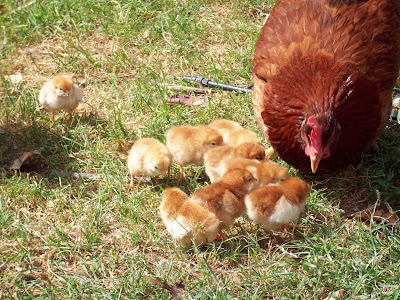 I was surprised she let me get so close, I even held one and she just watched me. I'd like to think it's because she trusts me. 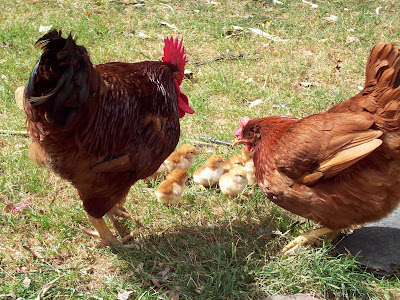 This is the rooster I'm keeping.
I'm sure he's papa to at least one of them! 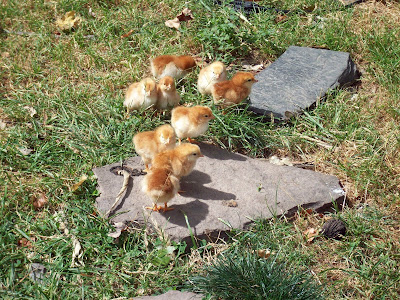 Hard to believe these little babies will grow into such big chickens!
They're so cute! 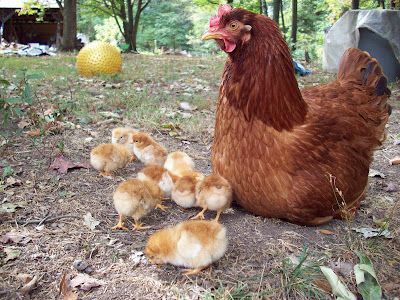 Mama Hen was pretty good at guarding her babies, but when we followed her to the coop, we found 2 dead chicks. Their eyes were pecked and bloody. Poor babies.
Then while we were nearby, one of the roosters pecked one of the chicks. Didn't seem hurt it, but it flipped in the air and I knew I would have to quarantine Mama Hen and her babies if I wanted all nine of them to survive. 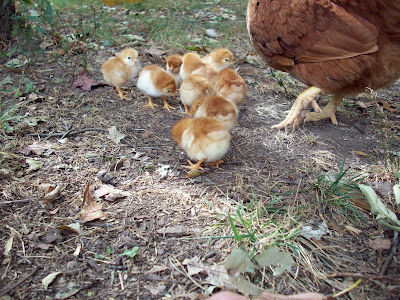 Who really knows what goes on in a chicken's head, but there is a pecking order and these babies are on the very bottom of it right now. Mom and the kids helped keep the other chickens away while I caught Mama Hen and her babies and put them in a cage. I spent the morning building a fenced-off area and then had to run down to the farm store and pick up a new waterer and chick feed. They are safe in their pen, using the cage as a nesting box that I'll lock up at night and open during the day.

If I had known she was setting on eggs, I would have taken them away, for it's a little late in the season for new chicks. Nights are getting cool now, averaging in the 50's and 60's, but the days are still warm-- today it was in the high 70's. If it get's real cold and the chicks are still young, I'll break out the heat lamp.

I have every intention of butchering the 5 extra roosters, so no harm comes to the babies. I have extra incentive now, the instinct to protect the babies over-ruling my hesitation to kill a rooster. That extra motivation should help me get the job done and keep from putting it off.
_

At least, life provided a solution for you about the roosters ;-)

Wow!! What a huge Surprise! Yeah.. It's sort of late in the season for her to be hatching eggs but at least it's not seriously that cold sooo hopefully all goes smoothly for you guys!! :)

OTOH - I need to ask you a question! What kind of pumpkins do you suggest I buy? I would like to try and puree then put in the freezer to freeze them! What are your suggestions?!?! LMK! :)
HUGS - J-

What a great surprise! That's even more exciting than nervously anticipating the hatch date. All the benefits and none of the worry. :)

Better you than me. I could never kill a rooster or anything else for that matter. I used to watch both my parents do that when I was small and thought nothing of it. Today? Not me.

Karen-- that's one way to look at it! :o) Much of our day is spent watching the baby chicks when they're not hiding under mama.

Juli-- This morning was chilly, high 60s, but you know how it can be out here, sometimes we have pretty warm Septembers. Hopefully it'll stay warm for a little while longer, otherwise, I'll need to bring out the heat lamp for the babies.

You can usually find sugar pumpkins in the produce dept at the store, they're smaller, meant for cooking rather than carving. But you can use regular pumpkins too. I have tried both and I don't really taste a difference once I add all the spices. A larger pumpkin means more puree to freeze. Don't go too big, though, because the skin gets tougher and then you'll have to peel it-- more work for you.

Ron-- So true! I felt bad for you when you went through all that effort and the end results were so sad. It's nice to expand the flock without breaking out the wallet! The husband is off tomorrow, so I'm aiming to butcher 2 roosters then. Wish me luck!

Cheyenne-- I knew it was going to be something I needed to face when I decided to own chickens. I've put it off long enough, though, and it's time to get it over with.

Very cool! Congrats on the baby chicks! We've no roosters, and so no baby chickens, but I was hoping, perhaps, our drake would actually do something and we'd have some ducklings. None, yet, though ;).

Bah, it is what it is. In the end, I've got a dozen healthy chicks to replenish the flock, so no complaints. Next year, I have ideas for what to do different.

I do wish you luck. I figure the cone method will be a lot more controlled than the nails in a stump. I hope all goes well. Thanks to the tractors, I may have some to butcher this fall instead of feeding the local wildlife...

congrats on the baby chicks!!!!!

Cool blog you got here... you write very well! Do you also write on Facebook?

Wendy-- Hopefully not until it gets warmer though, for your ducks. It's getting chillier by the day here and I've started to keep a heat lamp on the chicks. They huddle under it when they aren't under mama.

Ron-- How else are we going to learn, if not from our mistakes, right? So long as we don't keep doing the same thing over and over expecting different results.

I was looking at my gallon vinegar jug-- I don't think it's large enough to use as a cone for the roosters. I'll have to look for something bigger. I'm thinking I'll buy a cleaver to use for chopping the head off instead of the hatchet. I'll make a cleaner cut that way, I think, compared to the hatchet.

Sugar-- Thank you. I have a FB account, but I don't go there much. I prefer my blog.