All summer long, the yardsales have either been slim pickings or we haven't been hitting them with our usual ferocity. But the last couple of weekends, when we happen to go out and spot a yard sale on the way, have more than made up for the summer's misses. 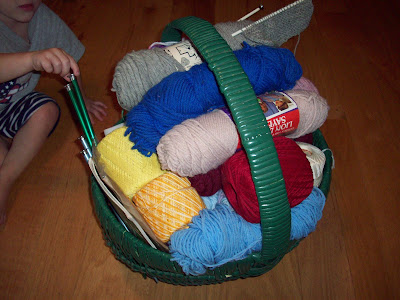 On our way to the next big town over, we spotted a yard sale at a house that has not had a yard sale in the entire 5 years we lived here. It's a round-ish style house so I always look at it as we go by. Anyway, it wasn't a whole lot of stuff, but I saw this basket with yarn and other goodies and when I asked, the lady said it was $4 for the whole thing. Good deal! A lot of the yarn is new and it had 3 sets of knitting needles, a couple of knitting pattern books, a teach yourself to knit booklet, and some crochet thread. Evelyn has been learning to knit on those knitting looms and so getting cheap yarn for her to practice with is great! 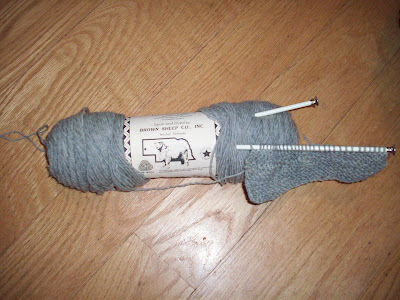 There was one skein of this wool yarn and I claimed it for myself. Evelyn asked me to show her how to knit with the needles but I only know how to do one basic stitch. I used to make those little washcloths from cotton yarn and that was quite a while back-- at least 15 years or so. I had to really struggle to remember how to do that and the little teach yourself to knit booklet wasn't too clear with the instructions, or at least, not how I remembered it. I finally figured out the basic stitching and I have been knitting a little here and there. I'm thinking gift for Christmas, if I can keep it up.
***
Low:

I need to find a good, used fabric cleaner machine. I've been hoping to spot one, but no luck so far. They cost about $100 new and we don't have carpet except for in the apartment, so we'd only really use it on the couch. Either that, or we need to keep an eye out for a good, used couch. While Andrew was busy doing one thing, and I was busy doing another, Peter got into the fridge and dumped a nearly full gallon of milk on the couch. -sigh- It's still dripping milk an hour later. Even if we get a cleaning machine, it won't get into the insides of the couch, so it looks like our best bet would be to get a couch. Or else we put up with a stinky couch. -sigh- My plan was to wait until all the kids were over the age of 5 and then get a new couch, but this puts a little wrinkle into my plan. Not too sure what we are going to do about the couch. If money was no object, I'd get the couch reupholstered, but it's an issue, so what to do, what to do?

Maybe we'll get lucky again and score a couch at the thrift shop. There was a nice one there at the same time I saw the table and they were only asking $50 for it. It's gone now, but we could afford $50. Well. I guess we'll just clean up the couch as best as we can and see if it starts to smell in the next few days. It's not as hot now, so that helps. Rancid milk is not a pleasant smell.

***
Andrew is busy outside and I'm busy on the computer, so I better go and make sure Peter isn't busy getting into mischief.
-
Posted by jenny at 6:25 PM

Nice finds! That's a big basket of yarn for $4. And one heck of a sturdy-looking table!

Ron-- that thought crossed my mind, too. Hosing it off and letting it dry. It's an old couch, has been reupholstered several times because it's a good solid wood frame, not cheap like nowadays. I'd hate to toss it and would prefer to reupholster it if I could. Might be time to teach myself how to upholster furniture...

Thanks, that table IS sturdy! So glad we found it when we did. All that yarn should keep Evelyn and her sisters busy for a while! :o)