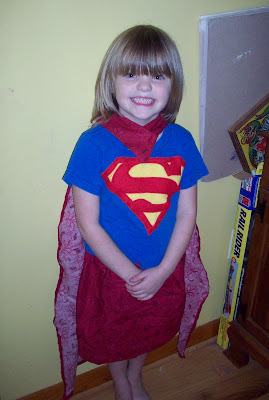 I couldn't be more pleased with this costume I made for Middle!
And more importantly.. She loves it!
-
Such a picky child, she likes things a certain way; like her pancakes being cut but still touching, or me pouring her juice and not Daddy, or this shirt with those pants...
I worried she wouldn't like the costume and then I was gonna have to figure something else out and let Youngest be Super Girl, but she loves it. LOVES it!
-
I cannibalized a damaged shirt that had burned sleeves from my Mom's house fire back in Jan., and I saved the shirt because I thought the fabric was nice. I cut along the sides and around the front of the collar, then hemmed the rough edges to make the cape. I planned to save the button and button-hole from the collar, but it was too big, so I overlapped the pointy parts of the collar and put snaps in. The front panels of the shirt had the sleeves trimmed off then sewn together to make a matching skirt. If someone looked closely at the skirt, they would see button holes on the bottom hem! As it is, she zooms around the room whenever she puts it on, so I doubt she would sit still long enough for anyone to notice!
-
I had the old blue t-shirt-- it had a logo on the front for a zoo and I made the superman logo from fleece I had lying around and made sure it was big enough to cover the old logo, then sewed it on. Middle was literally breathing down my neck while I was sewing it on the sewing machine and the minute I snipped the last thread, it was whipped out of my hands and on her body! Just look at her smile in the picture above!
-
The other costumes are done, with no sewing from me. We pulled together clothing to make a witch outfit for Youngest and already had a witch hat from an old costume that had been ruined; and for a vampire costume for Oldest, I only needed to get the fangs and make-up. When I was going through clothes, I found a lion costume for Baby from my sister, so he'll use that, since the french painter outfit is too big for him.
-
Can't wait to get pictures of the whole gang!
Happy Halloween!!

You are so clever! Her costume looks great!

Brilliant costume, her smile says it all.

Fab costume....now where is the picture of you in yours??