Why Did The Turtle Cross The Road?

To get to the other side, not get hit by a car. 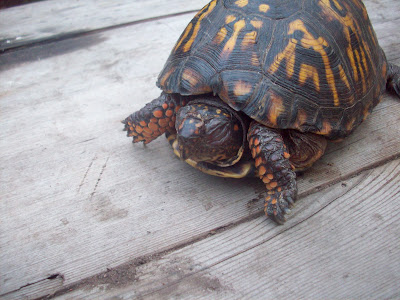 So this turtle shows up in my garden the other day. I was thrilled. I have a soft spot for turtles.
Then I took a closer look at it and realized there was something wrong. His eyes are not open. As I look closely, I can see there is a crack in his shell and it looks like his face got a rude introduction to a tire. There is an open wound on the top of his head that has a shell fragment stuck in it and it healed over, but I'm not too sure about his eyes... Can he open them at all? Is he blind now? He can walk fine, he has strength to push his sharp little turtle claws and scratch my hand while I hold him.

We called our local wildlife dept in town, the guy said put him back where I found him, they don't do turtles. No, no, no.. I can't do that. So I turn to the handy-dandy internet and search for box turtles and found a link with an email address. I didn't hold out much hope that I would hear from them the same day I sent the email, but lo and behold-- I did!

I sent pictures and she replied back that the turtle was likely dehydrated and needs water. When turtles get dehydrated, their eyes swell shut. I hope that's the reason why his eyes are shut. I have him soaking in a bucket with a little water in it and hope that helps. She referred me to a wildlife rehabilitation link and I found 2 not too far from here, so I am going to contact them in the morning and hope little turtle here can get some help.

Turtle has put things into perspective for me. I woke up feeling out of sorts, I didn't sleep well and had weird dreams. Our van being out of commission stresses out the Husband and he doesn't like taking the only vehicle that works and leaving me and the kids stranded. What if something happens and I need to go somewhere? Then we worry that it will cost more than we can afford to fix. We're working on the O2 sensors now, and if that doesn't work then it may be the thing-a-ma-jiggity-whazit (I forget the word, sorry) and it's not cheap and we don't have that kind of money in the bank.

Usually I am the go-with-the-flow kind of gal, but talking about money before I close my eyes at night screwed me up and it wove itself into my dreams. I know things will work out, they always do, and I need to give my worries up to God and focus on what I need to do.

At least my life is not as bad as poor turtle here-- getting run over by a car and then not being able to see. I can't imagine what kind of pain he must be in and how long has he been like that?

Speaking of not being able to see, my dad just had surgery for his eye today, unexpectedly and without the surgery, he would lose sight in that eye. I hope the surgery is a success; they won't know until next week. I love you Dad, hope everything goes alright. xoxo

So, perspective? We'll deal with the van, at least we have our health.
Posted by jenny at 11:31 PM

Great post Jenny. Thinking of you, your dad and the lovely turtle. xo

Awwwww, the poor wee thing!! I have a rather soft spot for turtles too and hate to think of it suffering...but wasn't it lucky that it stumbled into your garden!! (I'm surprised that the wildlife place told you to put it back where you found it!!)

Money worries are not easy...we've had our fair share since coming back to the UK and it can become all consuming can't it!! You'll get there...just like we will :-)

Chris had to have surgery on his eye's a few years ago and he's been fine ever since!! Hope all goes well with your Dad

Thank you for not putting him back in the wild, as it would have been a certain slow death. Turtles rely mostly on sight for survival.

Right now he is in urgent need of care. Soaking him in shallow water, and keeping him in a dark and quiet area is good. The upshot is, they have a remarkable ability to heal, and with patience and time, an experienced wildlife rehabilitator can insure their recovery.

If you still have difficulty finding a wildlife rehabilitator, you might try this link: http://www.nyturtlecenter.org/
Although they are based in NY, they may know of someone who can help.

Oh Jenny I can't tell you how much I really think I truly love you for being so kind to that turtle. "Put it back where you found him" ??? NO WAY!! I could never do that, and I'm glad you can't either. Sweet lil guy, bless you. You better BELIEVE I will be praying for your Dad! (and your car, why not?) You of all people deserve a good outcome :)

Also, once your turtle has healed, you should return him exactly where you found him. In this case you will probably need to wait until spring, as he will undoubtedly need the winter months to recover and won't be able to hibernate.

Turtles have site fidelity and maintain a small home territory. If he is moved to a new location, he will be lost. Turtles roam, sometimes into danger, when moved.

So happy he is in caring hands.

Dj-- Thank you sweetie! I appreciate the positive thoughts! :o)

Carol-- Just when we think we'll be ok in the money dept, along comes something like this to drain it all away again. *sigh* Seems like there is always something that needs fixing.

Turtle seems to be doing better, I hope I can help it. If I had the money, I'd take it to a vet myself, but as it is.... Hopefully I find someone to help poor Turtle!

TantraPM-- Thanks for the tips. I currently have him soaking in shallow water. He is looking much better since I did that, not so sickly and he is getting a little fiesty now. No word from the local wildlife places I contacted, will try the link you gave me-- Thank you!

I would love to have turtle returned here once he is rehabbed, we had several turtles come around in the summer when we have the kiddie pool out. He is bigger than the others so I know he is not the same one as the pool visitors. There is a pond on the other side of the woods, I imagine there are a bunch of turtles living there.

Gringa-- Knowing me, if I listened and put him back, I would forever be wondering what happened to it and if I found it dead, I'd feel so guilty. My karma couldn't handle that. I need to make sure the little guy gets better.
thanks for the prayers, I appreciate it! :o)

Oh Jenny Hang in there! Health really is so paramount...I thought I was over the stressing about money thing but then when we all got sick on end on top of being broke it just felt like too much...still here we are rather healthy on the other side and all of a sudden the being broke part doesn't look so bad. Faith, hope, trust. You've got all that going for you!
sweet turtle!

Hey Baby girl, just an update on my eye. The detached retina surgery was a success so far but go for follow up next Monday to find out for sure. For now I have to take it easy and rest a lot(enough already) I see little black spots on the side of my left eye that tells me when I've over done it so I scale back till it goes away! Pain in rear cuz I really would rather be doing something.
Those pants you made the lil'est one looks good! Make one out of lead to slow him down? Or add rocks to his pockets? Have to admit I have no experience in telling you how to deal with him as I had only 2 girls but have to say you are doing well. Love hugs n kisses Pops