The Great Love Affair is Over

For almost 2 years, Middle has had an ongoing love affair with Woody and Buzz from 'Toy Story'. She would ask to watch either Toy Story or Toy Story 2 every day, sometimes 2 or 3 times in a row if Oldest would tolerate it. She would watch the TV, entranced with Woody and Buzz on the screen. Then, at the children's consignment shop I worked at, they had a Woody doll and a Buzz doll! Middle would make a beeline for them every time we came in for me to work and would play with them until it was time to go home and she had to be forced to put it back. She remembered where she put it and the next time we came in, found them and resumed playing.

She had an old cell phone of Hubby's that she played with and when I would ask her who was on the phone, she said, "My boyfriend." Oh! A boyfriend?! What's his name? "Woody", she'd say in a most coy voice while fluttering her eyes. Then she would be on the phone again later, only this time it was her boyfriend, Buzz. Only 3 and already playing the field!

When it came time to shop and the owner of the store let each child pick out $5 worth of whatever they wanted, Middle grabbed Woody and Buzz. They went to bed with her, rode in the car with her, sat on the floor patiently waiting for her to finish her dinner, watched Toy Story with her and pretty much went where she went. We would go to yard sales and find additional Woodies and Buzzes and other characters from the movie. Pretty soon, we had every single character and she played with every single one. We got a second Woody when Youngest would sneak him away and Middle burst into tears at having to share her boyfriend with her little sister.

This past sale, a couple months ago, she declared that her and Woody 'broke up'. Then Buzz was soon out of the picture. Then Jessie's head got decapitated. Then when I threatened to sweep up the toys if they didn't hurry and pick them up, Middle didn't come running when Mr. Potato Head and Piggy bank's lives were at stake. The Great Love Affair was over. Woody and Buzz have been tossed in a corner of the basement and there they sit, abandoned and lonely. Kicked aside when they bounce around on their bouncy balls and they're in the way. 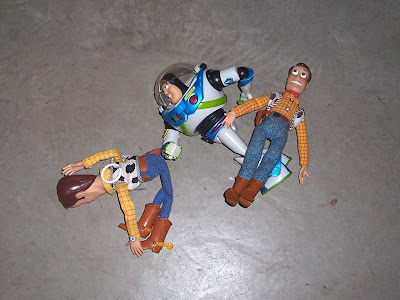 Middle hasn't asked to watch the Toy Story movies lately, opting to watch 'The Little Mermaid' instead. She has been playing with her dolls, dressing and undressing her Barbies (or rather, asking me to dress and undress her Barbies for her). I'm actually kind of sad about Woody and Buzz. They were good boyfriends, always there when she needed them, did what she asked, never tried to cop a feel, never tried to push Middle into doing something she didn't want to do, and kept her company at night when she was scared of the dark. I'll be saving them, putting them into a box in case she needs them again.

Awww, and now she's having her heart broken by "The little Mermaid"...
Or was that just me?

Although the sugar-coated Disney version is not nearly as tragic as the original story.

It's always sad to lose a good boyfriend! :)

i loved the fact they watched toy story with her! funny post! poor woody and buzz though - what happened between them i wonder? it's like betty though, one minute she is inseparable from her duck, the next she is inseperable from her penguin - children are so callous!!

Sweet tale. I remember something similar with my son. He's now 11. When he was your daughter's age, he went the a simialr phase, only with him it was with The Power Puff Girls. He had sets of them and played with them frequently. I worried for a while about how long he would go through his love affair with them, but there came a day when they were tossed aside and in came video games to replace them. He also went through a Barney stage. When he was about 6 or 7, he finally gave his stuffed Barney to his little cousin. We hated to see Barney go as we had all grown accustomed to having Barney along on all our outings. He was a comfort object for us all in some way.

But our children grow up and their very loved toys are put away or passed on. All a rite of passage. We know they were well loved.

I can only imagine how heartbroken Woody and Buzz must be. Poor guys.