My worries about gentle Henry are over. The chickens resolved the issue themselves and didn't include me in on the decision. I had decided I was going to keep him in a separate pen and was gathering materials to make one, but then I saw Rocky take off after Henry and chase him into the woods. I had a funny feeling that I wasn't going to see him again when I saw the chase go down.

We had company, I didn't follow them until after our company left and then I went out into the woods and called and called for Henry. He never came back. I waited a couple days, going out into the woods every few hours hoping to see him, but either Rocky killed him or something else snatched him up. It's been 10 days now and no sign of him. 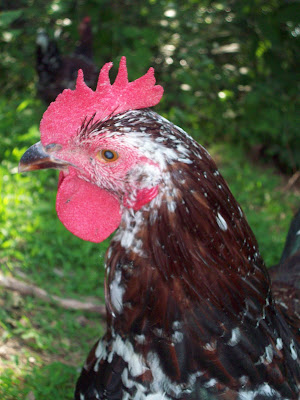 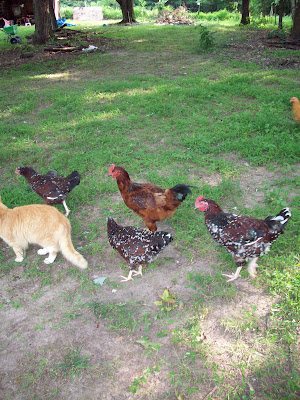 With Henry out of the picture, Rocky's new target is the other Speckled Sussex rooster you see on the far right, in the pix above. He's kind of mean and he pecks your feet when you walk by. He will chase you and peck you and when I say "peck", I mean he pecks. Hard. He has broken skin and left bruises where he pecks me or the girls. He's a stubborn one, that one, and refuses to get run off, though Rocky tries repeatedly to chase him off. I keep him separate in a large animal crate we have, and let him out when the other chickens are off in the field out of sight.

I called a neighbor that I know, who hunts and processes his own deer. I thought he might know how to butcher a chicken, but he says it's been over 50 years since he helped his Granddaddy butcher a chicken. Another neighbor sells eggs, so I'm thinking they may also butcher their own chickens, so I hope to go over there one day this week and introduce myself and ask.

I think in the future, I'll only purchase female chickens and leave those ornery males out of the equation. You don't need males for eggs, hens will lay eggs, but if you want them to hatch, then you need the rooster to fertilize the eggs. 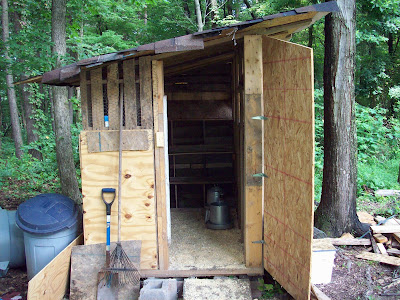 I am gathering materials I need to build a fence around the chicken coop. They wander pretty far, and though they always return at night, they will soon start to lay eggs and I have heard enough stories about hens laying eggs every place but the nesting boxes. I don't want to look all over our 15 acres for eggs, so a fence it is. It will have two separate pens so I can rotate pens and let the grass regrow from all their pecking and digging. Ideally, there should be 4 pens, to rotate every week and then each pen will have 3 weeks of regrowth before the chickens go back into that pen. My issues are cost, so I need to figure out how much the fencing materials will cost me, before I make my final decision on how many pens there will be.
Posted by jenny at 5:55 PM

If you turn the soil and throw down some grass seed when you move the chickens, it only takes two weeks for the grass to grow back - at least that's been our experience with moving our broiler chicks around. We have them in a movable pen, but we don't have a lot of space to move them. So, it's two weeks in this spot and two weeks in the next one with the soil being turned every move and grass seed planted and covered with hay. It takes about a week for the grass to peek through the hay, and we give it another week to get good and established. Broilers are a lot harder on the area than our hens.

Watermellon grows great in an old chicken yard! Rhubarb too.

Awww, I'm so sorry to hear about Henry....he sounded like a lovely wee thing!!

*sigh* about Henry. He had tough luck.

Wendy-- Thanks for the tip! I'm thinking the pen will be pretty large and extend out into part of the woods, so I'm hoping to get away with not having to lay grass seed down. Still thinking on it.. :o)

Lantana-- I already have my rhubarb established, so maybe I'll take some of that chicken poop and spread it over the rhubarb patch!

Carol-- He was a sweetie. I'm trying not to get "close" with any of the other chickens now. I feel bad for the mean one that gets run off and I intervene when I see it, but I am going to take him and two other males and turn them into dinner. problem solved!

Karen-- he sure did. Poor little fella.

Hiya, I wanted to come out of lurkdom to suggest something with the mean rooster. When I was younger, my family had chickens for about 2 years, one of which was a horrid rooster that scared me and my brother. However, my parents showed us that if we pet him just as he was homing into our feet, it stops him.

However, he may just wheel back in the other direction and try to peck you again. (or at least that was what he did, he killed the only other rooster we had before we got to have a sense of "normal" rooster behavior)

Just pet him and usually by the 3rd pet he'll get bored. Hopefully that might help until you can put the bugger on the dinner table. (We relished the horrid rooster when the parents finally butchered him!)

Hi Melora-- Thanks for coming out of the dark and leaving a comment! Once I grabbed him, he usually calmed down, but it took an awful lot of pecking before I could catch him. He charged you! I'd swat him away and he would come back and peck you harder than he did the first time. I just posted about butchering my first chicken... he was the first choice. I already have my eye on another rooster we have, he keeps pecking the ladies. Naughty, naughty!