The thing about living in the country is that we're so spread out from neighbors that children can't trick or treat around here. People look for other ways to go trick or treating, like the mall or other venues. A local church in town hosts a 'Trunk or Treat' in the parking lot out of the trunks of their cars. It works well, the kids yell "trick or treat" and a little something-something gets dropped in their open bags. We thought we'd try going to one of the little neighborhoods as well and I was quite surprised, though I really shouldn't have been, at how many people were parking their cars and walking around the neighborhood.  There must have been hundreds of costumed kids! I hope those houses stocked up on candies! We went to a couple of houses and then decided to head back to the car, there were just too many people and cars and I didn't think it was safe anymore. Plus, it was cold and started to mist so after a quick walk through the small shopping strip where each store was also giving out candy, we came home. 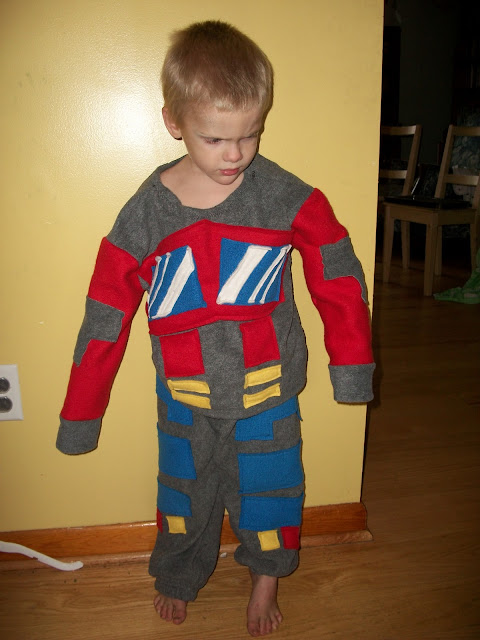 I made Peter a Transformers costume!
He loves Transformers and has several cars he goes to bed with. I found an image of Optimus Prime from the original Transformers cartoons and used that as my inspiration. I purposely made the outfit a little bigger so he could wear it longer and while I was sewing it he was so excited, trying on unfinished pants and sleeves and shouting in his little 3-year old voice: "Transformers! Transformers!" It's made from warm fleece, which could also be used as jammies or a regular outfit.  I also made a mask from the Transformers autobots logo but he refused to put it on for the picture. I could barely get him to stand still long enough for a picture.
So, time for trick or treating and what does Peter do? Absolutely will not put on the costume. Fine. He can use the Popeye shirt. Nope, won't use that either. I know! We'll put him in camo pants and he can use his camo jacket and he'll be hunter boy, except his camo pants were in the dirty clothes basket and after a sniff-test, determined to be too stinky to wear. We finally managed to get him dressed in regular clothes and after much screaming and whining, got him buckled in the car to go. He perked up once we got out of the car and went trick or treating. 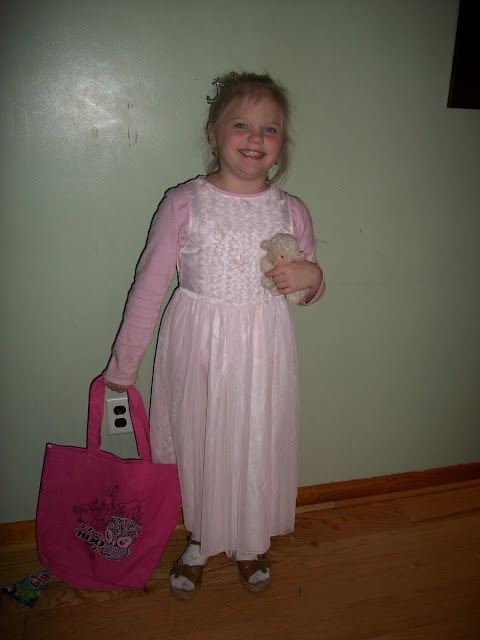 Miss Gretchen as a pink princess.
Someone tell my girls to stop growing up! They were so excited for make-up! I never use make-up myself, but I had coupons to get free make-up, luckily, and bought some eye shadow, blush and lipstick just for Halloween. 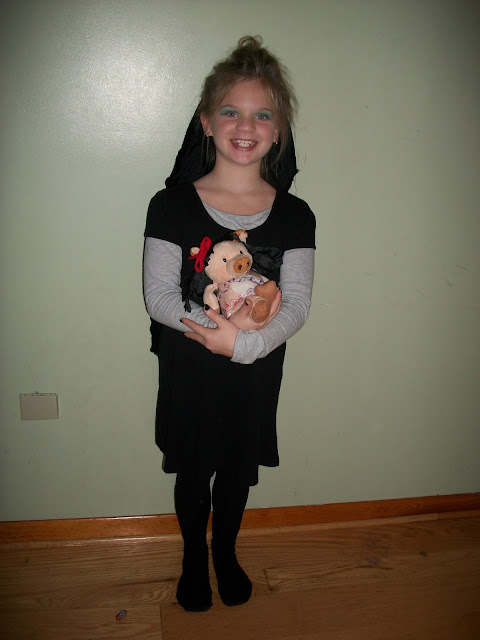 Evelyn started out as Frankenstein's bride, but morphed into a black princess bride. I wasn't able to get to the store and buy hair stuff to make her hair black and add white stripes to her hair, but she was ok with that. She was just as excited to wear make-up and I tried to make hers a little more dramatic and boy, did she look like a different girl with all that make-up on! She made Piggy a costume, too! 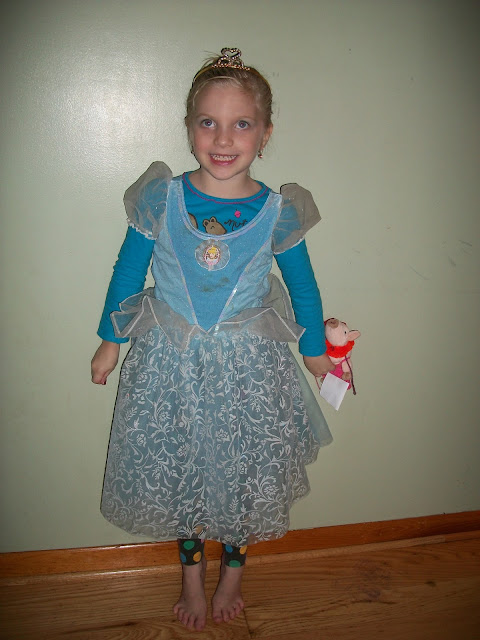 Miss Sylvia wanted to be a princess, too, and while looking for a fancy dress to wear, she spotted this old Cinderella costume we had that was down in the basement for a couple years. It just fit her and she opted to wear this. Flimsy and poorly made, but she was happy and that's what matters.  I made her wear a shirt and tights underneath﻿ since it's see-through and it was cold.
Happy Children make for a Happy Mama.
I'm disappointed Peter didn't wear his costume, but I know he'll wear it later. I enjoyed making it anyway.
Hope Halloween was good for you, too!
Posted by jenny at 12:01 PM