I confess that I don't bring my own bags to the store and use the plastic bags they offer. I've always felt guilty about that but never really did anything about it. I don't like the cheap bags you can buy-- I find they tear easily ( my MIL passed some on to me ) and I don't want to spend money on something that I know will not last, even if it's only $1 (usually). I have the sewing skills to make some, but I'm either too busy or if I have the time, I don't want to spend it making a bag. In my defense, we DO bring the plastic bags back to recycle and we re-use plastic bags around the house as little trash bags for our smaller trash cans and for litter box waste.

I saw a post quite some time ago.. probably 2 or 3 years ago and it's never left my head. I looked for it but couldn't find it so I'm unable to share the link. Anyway, the person used a plastic bag as a pattern and the resulting bag ended up just like a cloth version. I really like the plastic bags that Target uses, so I used one as my pattern. I used a vintage pillow case which eliminated some sewing and reduced a little bit of my pillow case stash and I really like the final result: 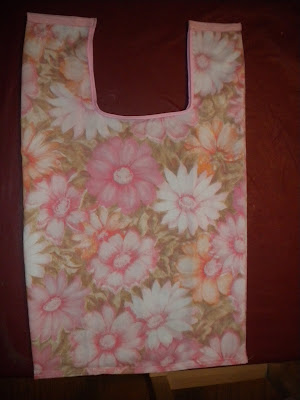 Ta-da!!
I used bias tape around the handle and the opening of the bag and folded in the sides just like a plastic shopping bag. I like it, but I can see where I could use more improvements. Like the top of the handles are a little thick with the folded ends and then covered in bias tape. It makes the top pretty stiff and doesn't feel very flexible. I also used an unfamiliar sewing machine for the first time when I sewed the bottom and it totally messed up the stitches. grrr! I was too lazy to pick out the stitches so after I switched back to my usual machine I just folded over the ugly stitching, then sewed over it. It made the bottom a little stiff, too, but it works. 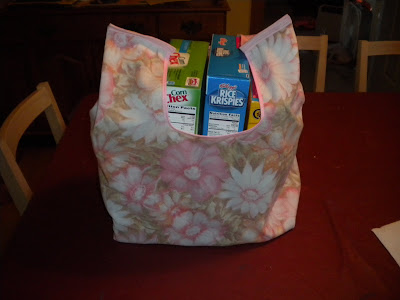 It holds 4 boxes of cereal easily with a little room to spare. I could probably fit 5 boxes in there, but I know if I were to take this in to the store, they wouldn't pack it tightly either.

I have since used another pillow case to make another bag, a few tweaks here and there, and it's better and worse at the same time. I improved on the top of the handle and it's not stiff, but I made the side opening of the handle a little too small. I also made the bottom of the bag boxy instead of folded in like a plastic bag is. I like it, it'll do, I think I can improve on it. It also holds 4 boxes easily and I have already used it at the store. There will be another bag in the works with more tweaks as soon as I can bring myself to give up another vintage pillow case. 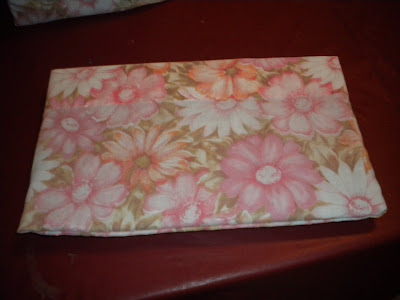 I had a little bit of pillow case left over, the hemmed open part of it. I got to looking at it and thought it would make a nice cover for the laptop. I measured the length, cut, sewed up the side and length of the pillow case and it fits! Our laptop is not the traveling kind, it stays at home for use on the table or in the living room, so I just wanted a little slip cover to keep the screen clean when it's shut and put away. Since it's a vintage pillowcase and has been washed who knows how many times, it's nice and soft and lint-free. 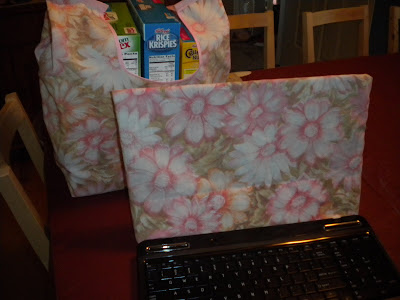 I like it! Two useful items from one vintage pillowcase!

Labels: from this/to that, making do, sewing, show and tell