I got invited to a fancy New Year's Eve party in D.C., but at $40 per person, I'd rather stay in my warm and cozy home with my family. I certainly don't want to drive 3 hours to D.C. and then deal with traffic and potential drunk drivers and get home all red-eyed and exhausted from driving in the wee hours of the morning.

My plan for spending New Year's eve is to just be home, maybe watch a movie with Andrew, kiss each other one last time for 2010 and then another kiss welcoming 2011. Sounds good to me! Unfortunately, Mr. Opossum had his own ideas for celebrating the New Year:: 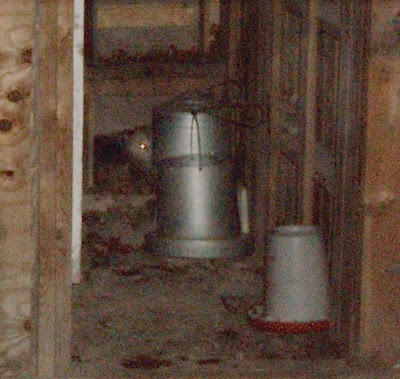 He killed and feasted on a chicken, right there in the nest box at the bottom of the coop! Andrew went out to shut the coop up for the night and came in to report to me that 2 chickens were out; one under the van and another heading into the woods. So I grab my sweater and flashlight and go out to check, thinking it's just a matter of herding 2 chickens caught in the dark back into the coop. Imagine my surprise when I shine the light inside and catch two reflecting eyes shining back at me!

I run back into the house to fetch Andrew and he fetches his .22, but I was afraid the bang would scare the chickens out of the coop, which is the last thing I wanted. I suggested the nearest tool handy, which was the rake, and Andrew hit the opossum a few times, but he wouldn't budge and give up his meal. All it did was turn around and huddle itself in the corner. Andrew went back in and got his BB handgun and shot it a few times, but it still wouldn't budge. Banged on the outside corner where the opossum was, and other than jumping with every bang, it remained there.

I ended up getting the hammer and pulling out the board that covers that corner and Andrew took the rake and poked it and it shot out the hole I made and went under the coop. Not exactly where I wanted it to go, but the coop is closed up and there's no way for the opossum to get back in now. I removed the dead hen and examined it, and he must have been in there awhile, a good part of the breast meat was eaten and its' stomach was exposed with all the ingested food spilled out. Poor hen, I feel bad and hope her death was quick.

I still have 2 chickens on the loose, but it's a mild night, thankfully (the temps got into the 60s today!!) and I'll find out in the morning if they are still alive. They ran into the woods and from past experience, it's damn near impossible to find a brown chicken amongst brown leaves and trees and branches. The warm weather melted what little snow we had, so I feel their chances of surviving the night are good. If they hunker down and keep quiet, they'll do alright.

In the morning, I'll inspect under the coop and if it's all clear, I'll cover up that hole. What a way to start the new year. I think it's time for Andrew to teach me to use the .22, so if I ever needed to, I can do it myself. I got a little squeamish thinking about killing that opossum, but now that he's had a taste of fresh chicken, I have no doubt it'll come back. I'll have to get over that squeamishness and kill it the next time it comes around.

I think I'll have to make that into my New Year's Resolution: Learn to shoot a rifle and learn to shoot it well.
-
Posted by jenny at 9:48 PM

We have problems with those doggone possums too. Just when we think it's safe to go into the water another one shows up. Knock on wood, I haven't seen one lately but that doesn't mean they don't come around. They feast on the cat food and for the past couple days the water ends up being very muddy. Racoons possibly. Dagnabbit.

happy new year from DC- i didn't go to that party either, so that makes two of us!!! :)

opossums don't run. when they are frightened, they just freeze and bare their teeth. i know, because i had one living in my living room for a week eating my cat food!!! and i had 6 cats in the house at that time. go figure.

one thing for sure. they are dumb as rocks and very easy to trap, even with a wastebasket- they can get in (but they can't get out, har har).

this website was VERY helpful-- i highly recommend them. opossums are actually related to kangaroos because they take care of their babies in a pouch on their stomach. aww. i know you're not feeling too happy about them right now. sorry!

Cheyenne-- we had racoon issues a couple years ago, but haven't seen any signs of them lately. Hopefully, the BBs my husband shot at it will keep the opossum away, I feel bad about it, but my chickens come first.

Raychelle-- Even if I lived in DC, as you do, I wouldn't have gone. Not my scene anymore. Welcoming the new year does not require getting drunk on my part! LOL! Maybe 2011 will bring you over to my part of the world for a visit?? Be good to see ya again! :o)

This one didn't even bare its' teeth at us. I think it's the same one we've seen in the past, probably a little bit tame by now because of the cat food, chicken scratch and scraps we throw out. I do feel bad, and I hope the BBs just bounced off it and scared it away, I didn't see any entry wounds or blood after he shot it, and he's a good shot.

Normally, I like opossums, I think there's a beauty to their ugliness, and I love that they have pouches for their babies. I read once that if you see a recently killed one on the road, you should check for babies in the pouch. But on this homestead, my chickens come first. I may build that fence around the coop after all this Spring. Wait and see...

We're going to have to dub you "Annie" as the character Annie Oakley in the muscial Annie Get Your Gun!

Hmmm... what a way to end 2010. May the year see the peace between opossums and the chickens. Ugh.

Hi there! I found your blog when I was searching building a chicken coop on railroad ties.. thanks for the info! Lots of good stuff on here! and you're a pretty entertaining writer!

Karen-- Wouldn't that be nice? No sign of the opossum yet.. hopefully the BB shots scared it away.

Angelia-- Welcome!! I'm glad I was able to give you some ideas for your chicken coop. A few of the blogs I got my ideas from no longer exist, so feel free to ask questions if you have any. We have voles and moles here, which is why I wanted a raised coop. 1 1/2 years later, I'm still pretty pleased with my coop, though I would make a few tweaks here and there. Come back again soon! :o)