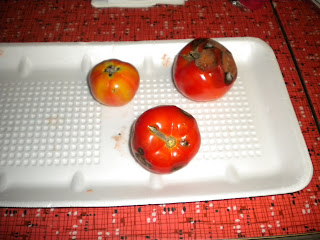 These 3 tomatoes represent the very last of summer's harvest. This is the first time we have eaten fresh tomatoes from my garden all the way into December! Before the first hard frost hit, back in late October, I harvested nearly all the green tomatoes. I left behind quite a few on the vine, and was going to get the rest the next day, but the next morning found them all mushy and limp under Jack Frosts' touch. Oh well, I still had the first harvest, which filled 2 milk crates-- nearly 8 gallons of green tomatoes!
-
Our sun room was an add-on by previous owners, and we think there's no insulation, plus the windows are those slat-type windows, which all equals to either a very hot room in the summer, or a very cold room in the winter. Makes it perfect for storing green tomatoes and letting them ripen slowly. The tomatoes that got moldy or mushy went to the chickens and we salvaged some by cutting off the bad parts. I have one lonely tomato left and I am amazed that I've been able to eat fresh this late in the year.
-
Andrew and I have long stopped buying taste-less tomatoes at the stores, preferring to wait until either the farm stands have them in the Spring, or from our garden. After the last tomato gets eaten, we'll be relying on all the tomatoes I canned over the summer-- more than 60 quarts worth! We are eating well.
-
All in all, I'd say 2010 was a very good year for tomatoes! There are a few changes I want to make for 2011's garden, but I'll probably plant the same amount, tie them up the same way, use the soaker hoses again, and use the same old carpet for weed blocking. I won't be planting the dark purple cherry tomatoes, or the yellow and red striped ones, but then again, I didn't intentionally buy those and I think they were mix-ups from the farm store where I bought the plants. The purple cherry tomatoes were tasty, but the skin was tough and I was pretty much the only one eating them. I ended up mixing them in with the canned tomatoes for extra flavor. The yellow and red striped ones were pretty, but not much in the flavor department and they got mushy fast.
-
As every gardener says, I am looking forward to the next garden and am already dreaming of trying new vegetables and new ideas for old planting habits. I hoped to have a winter garden this year, but time got away from me. Maybe next year will be the year!
-
My goals for 2011 garden are:

I think it's all do-able, not too costly to implement most of these, and I got some of the materials needed for some of the projects already. As soon as the holidays are over, the January birthdays have been celebrated, it's time to get started on 2011's garden!

Yay! Our gardens were such a dismal failure this year. Good luck with next year's garden! May every year give you an even better yield of garden fresh goodness...

Hey Jenny, I noticed no mention of corn in your 2011 garden. It's worth another try! We had fresh tomatoes from our garden late this year too (ate the last one about a month ago) and I was so glad hubby picked a bucket of green ones off the vine before the first frost!

Barefoot-- Yes, that's the one thing nice about gardens, if it doesn't do well this year, there's always next year! LOL My tomatoes were great, but everything else left something to be desired, sigh. Hopefully your gardens will do better next year, too! :o)

Karen-- you noticed that, eh? LOL I planted 15 rows of corn, and not a single ear was eaten. I just don't know if I can give up the space for corn anymore. Maybe it's the seed we're using?? What corn do you buy? I'd be willing to try again, but maybe only 8 rows... hmm. :o)

Jenny, I am behind on my blog reading... 'cause I got a new sewing machine :-)) Hubby said to tell you one of the most important things about corn growing is the planting depth. We grow silver queen (our fav), and usually a couple more varieties (bodacious, peaches & cream, and another one I can't think of). Hope you all had a wonderful Christmas! Happy New Year!