Waste Not, Want Not

I never understood that expression when I was a kid: Waste not, want not. I never asked what it meant and no one ever explained. Now that I am older and a little bit wiser, I understand now and I am trying to teach my children what it means. 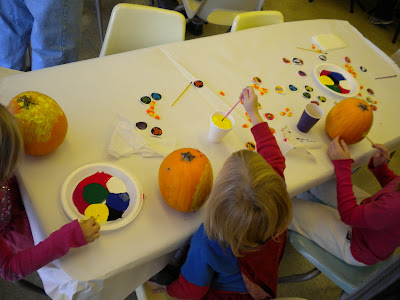 At the Library on Oct 30, the kids got to paint little pumpkins. They've been sitting on the shelf, kind of forgotten, since Halloween is over and the decorations are put away. Seemed like such a waste of perfectly good pumpkins not to do anything with them. Hm, why not? I told the girls I was going to turn their pumpkins into pies!

After washing off the paint (I happened to note it was non-toxic, washable paint), I chopped them in half, gutted them, tossed the seeds to the chickens (we don't like pumpkin seeds), and popped the pumpkins in the oven. Evelyn helped puree the pumpkin and from 3 little ones came 12 cups of puree! That equals 8 pies! Yum! I made 2 pies tonight for dinner tomorrow and the kids can't wait to eat their Halloween pumpkins.

While I was preparing the pumpkins to go in the oven, I explained to the girls about not letting food go to waste. Here were some fine pumpkins and if we did not eat them, and instead let them rot, we'd have no pie. Later, when we are hungry for pie, we would remember how we let those pumpkins go to waste and kick ourselves for not using them when we had them. If you don't waste it now, you won't want it later= Waste not, want not.

I can't say for sure if the girls understand what the expression means, but they did say they would much rather eat pie than toss out their pumpkins. Whether or not they understand it, one thing is for sure-- Dessert will be savored tomorrow! :o)
-

At the request of my sister, here's how to cook and prepare pumpkin for making pie.

Cut pumpkin in half. Remove stem, blossom end, seeds and stringy parts. Bake in a covered pan or covered with foil for about 1-hour at 350 until fork tender. Drain off liquid and cut into smaller pieces and process in a blender or food processor until pureed. You can freeze puree in zippy bags. I always make 2 pumpkin pies at a time, so I freeze in 3-cup portions for 2 pies. If you use pumpkin puree in other recipes, feel free to freeze in smaller increments.

My recipe for 2 pumpkin pies:


Mix all ingredients until smooth. Pour evenly into 2 pie crusts and bake 15 minutes at 450* then reduce heat to 325* and bake another 45 minutes until knife inserted in center comes out clean.

P.S. We ate pumpkin pie for dinner and it was deeeeeeeelicious!! We had my Aunt and Uncle here for dinner and polished off one pie. Still have another pie for Saturday's dinner! yum!
-
Posted by jenny at 11:58 PM

Yay! Wishing I can help you eat those pumpkin pies!

We have 2 medium size pumpkins sitting on our "rail" yet to be carved up or done anything about it!

So you cut it up and bake it for how long and at what temperature? And then what?