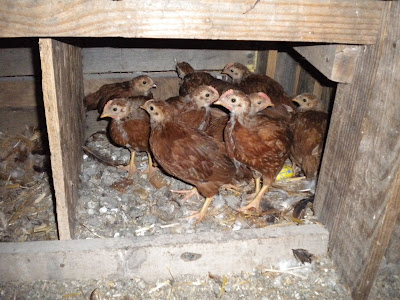 It's a fact of life that hungry things target chickens, including humans. Last year, before I had finished the coop, some animal killed a few of my chickens, which hurried along the finishing of the coop. Ever since, I've tried to be diligent about shutting the coop door when it gets dark to keep my chickens safe. I hate the daylight savings time change, as it gets dark so early now and usually I am in the kitchen cooking right when it gets dark, so the coop door is open for a little while before I get out there.

Last week, all of the little ones weren't in the coop. There are 9 little ones and only 4 were in the coop! Sometimes, they huddle on the outside of the coop, but none were there. Oh dear. It was one of those nights where I didn't get to the coop right when it got dark and it was around 8 at night by the time I checked on them. That means it had been dark a little more than 2 hours by then.

I searched in all the usual places the little chickens hang out, but I couldn't find any of them. I searched further, walked all around the house and finally spotted one huddled by the stoop at the far end of the apartment. Where were the other 4? After more hunting, I found another one squeezed in between an overturned trashcan and the house. Another one on top of the window air conditioner unit, where I never would have looked if I wasn't looking into the office window "spying" on Andrew. I found another one with the help of Maisie sniffing around the back of the coop. There was a chicken trying to squeeze under the coop. I was still missing one more and I looked high and low for it before I finally gave up. I hoped I would see it outside of the coop in the morning, but there was none there.

As far as I can figure, something must have gone in the coop and spooked the chickens. The older ones hang out in the nest boxes up high, forcing the young hens to the low roost bar and the lower nest boxes. That's the only explanation for why they were scattered like they were, one here, one there, when they are almost always huddled together in a tight group. It's been a week now since #9 has been gone, and I assume it's been eaten.

I'm making sure I am out there right at dusk now, when the chickens start heading into the coop for the night. It's getting dark before dinner, so it's a little easier for me to be out there. I hope it was a young rooster that got taken. I hope whatever got it has a nice full belly, but it better not come back. Might be time for me to take Andrew up on those shooting lessons.
-
Posted by jenny at 9:25 PM

Do you have problems with coyotes in your area?

MZ-- Until last Saturday, I hadn't known there were coyotes in my area. One of the hunters at the check-points had a coyote in the back of his truck. I've seen foxes around here, along with deer, opossums, raccoons, and even a bear, once! But haven't seen coyotes. It could have been one, who knows?

I just read that the coyotes were becoming something of a concern here in upstate NY... that they were more bold nowadays.

Missing chickens!? Let me tell you a funny story..it's true... years ago as a student at NTID, I had to stay on campus during Thanksgiving break, because it was too expensive to fly home when so soon Christmas break was around the corner. So, I brought a small roast chicken to cook for dinner and boy was I mad when I discovered someone stole it! I went up and down the dorm asking "Did you take MY chicken?!". :)

Karen-- I haven't seen a coyote around our property, but I'm sure they're out there. I don't expect them to pop out of the woods and do a "hello dance" for me! :o)

Oh Sugar! That's so funny!! Sorry you had to lose your thanksgiving dinner to another hungry student! I stayed behind for Spring break and I was amazed at how many other students stayed behind too. Made me feel better I wasn't the only broke kid around there! LOL When were you there?? I was there SVP 92 and stayed a year.