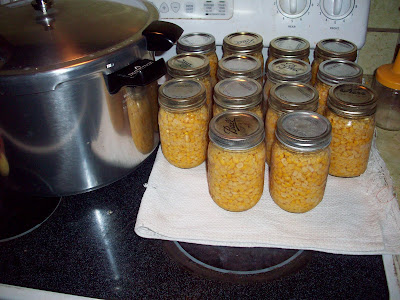 I've been asked to share my recipe for canned corn. I confess, I am always tweaking recipes and it's rare that I follow a recipe exactly as it is written. I can't help it--I usually think it can be improved if I added cinnamon or pepper or an extra dose of vanilla. The same goes for when I am using a recipe for canning jams. The recipe I use for canned corn comes from a recipe I modified a little bit. A dear friend of mine, who is mennonite, gave me her family cookbook and in it are all sorts of lovely recipes; each one I've tried has been declared delicious by my family. She gave me the cookbook when I asked her about canning and said there were some recipes in there for canning. I thought it very generous to give me the cookbook when it was only our 2nd time meeting each other! Anyway, The recipe in the book is for freezing corn and is as follows:

The very first time I made this, we were eating the corn right out of the pan!! Oh my! The sugar and the salt make a great salty-sweet flavor and it's Gretchen's favorite corn! She can always tell which corn I am using-- the store bought or my frozen corn. When I got the pressure canner, the instruction/recipe book included different canner recipes; the corn one is a basic one:

I modified the recipe a little bit and put a cup of sugar and 4 tsp of salt in the water to get that salty-sweet taste my family loves. I had some left over that wasn't enough to fill a jar for canning, and we tried it and it's as yummy as I hoped it would be.

I canned another 13 pints of corn for a total of 27 pints so far. The grocery store extended their sale on corn this week, so I plan on getting more corn for sure. I scored another wooden crate when I asked the produce worker at the store for a whole box of corn. They were happy to let me take the whole thing, which holds 48 ears in one crate. I thought they'd want it back to send back to the farmers to reuse them, but I guess they don't do that. I wonder if they throw all those crates away?? I better ask the next time I get more corn.

Anyway, let me know if you try these recipes. The sugar and the salt really add to the corn and make it taste great! Happy freezing or canning! :o)

No corn in Oregon yet! My mouth is watering looking at all yours. However I just got 10 lbs of blueberrys and 8lbs of green beans FREE!!! I make and freeze berry pies in the summer, it's so fab to pull out a blackberry pie in January. My family loves it :)-blessings and happy canning to you too!

No corn yet?? When does corn normally harvest around your area?? 10 lbs of blueberries??? You lucky duck!! I hoped to go blueberry picking this year, but time got away from me. I need to plant my own bushes!! We still have a frozen apple pie we need to eat before the apple season starts.. early apples are already trickling in! yum! :o)

Thanks, Jenny! Can't wait to put some corn away this weekend. I'll let you know how it goes!

Well, your recipe did not disappoint! I didn't think I could improve on the delicious sweet corn I was putting up, but the sugar/salt really put it over the top. Thanks again.

Peg-- I'm so glad you tried the recipe and liked it!! That sugar/salt combo really adds to it! :o)

I normally cook my corn, be it frozen or fresh in water that I've added salt and sugar to. I think we probably get the same results.