Have You Seen Me?

I love watching Evelyn's mind at work. There are times I can literally see the wheels turning or when that light bulb pops on. She has a little craft box where she keeps her supplies and a particular pair of scissors that she likes to use when cutting her scraps of fabric. She usually keeps it on her dresser, but there are moments when she forgets and leaves it out somewhere-- on her bed, the floor, the table. Her younger sisters and brother love when she leaves it out! They have craft box radar and know exactly when she has left it out.

Anyway, she moaned that her little red scissors were gone. She ranted and raved that one of her sisters or brother took it! She practically wanted me to strip-search everyone to find those scissors. I told her that next time she needs to be more diligent in keeping her craft box put away and I offered (again!) that she could keep her craft box with my sewing box in the cabinet, locked and safely kept away. I assured her that the scissors would turn up eventually, but she couldn't be consoled. She was really upset. 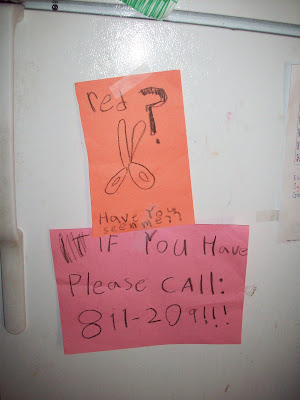 She made signs and posted them around the house. I had to laugh at the made-up phone number. 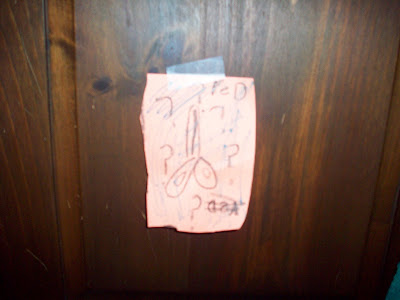 She specifically posted a sign on my dresser in my room, as if I was the one that took her scissors. I swear she gave me the evil eye a couple of times, but I hope it's only because I refused to strip-search the other kids and turn the house upside down. 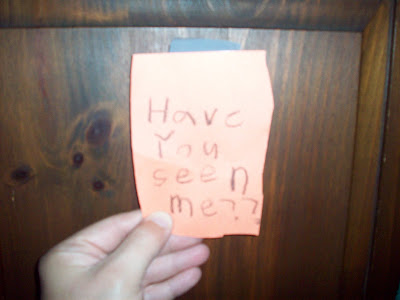 Eventually, the scissors were found. Turns out, Evelyn was the one that took them outside for an outdoors crafting sessions and left the scissors behind. I found them when we went to the pool and they were in the grass under the table. Good thing they were red or else they'd probably still be out there!
Aren't kids fun?! :o)
--

This is too funny! Was it Evelyn that made her Christmas list already and put fabric on it? I remember reading a post about that and thinking "hmmm, I need to share some stash with her!" I closed my fabric shop about a year ago and oh boy what a stash I have. All 100% cotton, quilting fabric. Send me an e-mail if you think she'd enjoy some (stupid question, eh?) and I'll send you some 1/2 yard cuts for her for Christmas. And yes, I really am a granny :-))))

GrannyKaren-- Yes, this was Evelyn that put fabric on her Christmas list. She begs me to take her to town so she can get some fabric, but it's rare we go out that way where Joann's is. Lately, she's been asking to cut up her old shirts and fashion them into something else, and once, she even threatened to cut up the curtains if I didn't give her any. What a girl! Oh! Your own fabric shop?! Sorry to hear it closed, it must have been sweet to have all that fabric to choose from! I'll send you an email soon. Thanks for the offer! :o)