Tell Me The Truth, Doc, Am I Gonna Die?

I make a lot of our foods from scratch-- partly to save money and partly because it tastes better. We have long since stopped buying meal "kits" like those so-called quickie side dishes or frozen heat-and-eat meals. There are a few exceptions, like fish sticks or just-got-home-don't-feel-like-cooking-let's-throw-a-pizza-in-the-oven.

That said, we had my Mom, Aunt and Uncle here last week. We had some paperwork to go over for the insurance people related to my Mom's house fire, and they stayed for dinner and an extra day. My Aunt brought a store-bought frozen lasagna for us to eat for dinner, so all I had to do was add a salad and rolls. It tasted alright-- doesn't compare to home made lasagna. The next day, since they stayed an extra day and I didn't plan on feeding 3 extra adults, I ran to the store and picked up hotdogs, buns, and chips for lunch. I bought a brand I don't usually buy (it was on sale) but I had it before (at least 10 years ago) and it's a good brand of hot dogs.

I'm paying the price. I believe I have food poisoning. Started out with severe stomach pains on Saturday morning and I was not hungry for anything. I declared it to be movie day and the girls and I watched a lot of movies while I huddled under a blanket in between my runs to the bathroom. Hmmm, "runs" might have been a bad choice. A few days later, I am still not 100 percent, but not as bad as I felt on Saturday.

Without health insurance, I cannot make an appointment to get a check-up and a diagnosis for what is causing my stomach pains. Everyone else seems to be fine and we all ate the same thing, although Hubby says the hot dogs gave him some severe gas. I have to rely on past experience with past illnesses and compare symptoms with those listed in our medical books and on the internet.

I'm slightly hypochrondiac, which means if I don't keep it in check, I can take a little stomachache and make it out to be a tumor growing and envision my belly stretching beyond normal limits and doctors operating and then removing a cancerous, hairy, 40-pound cyst from my body. I imagine a little blurb in the tummy to be something more than gas and think it must be my appendix getting ready to burst! It doesn't help that when I described my symptoms to my husband, that he started to imagine the worse, too, and later on, comes to me with tears in his eyes and tells me not to leave him!

When I think back to when the pain started and my reactions-- stomachache, runs, nausea-- it boils down to what I ate that I don't normally eat: the lasagna, the hotdogs, the chips. If, by the end of the week, I still don't feel better, after trying some natural remedies to help soothe the stomachaches, I may make a trip to the doctor's office. If anything, it will ease my hypochrondial mind and keep me from planning my funeral. In the meantime, I'll try and not be a monster to the rest of the family and drink lots of water and ginger ale. 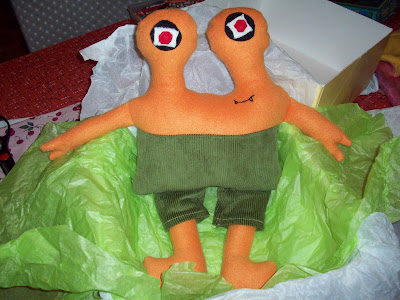 Speaking of monsters.. I finished this little guy for my handmade toy swap and sent it off to my swap partner last week. He was fun to make and I definetly see more monsters in my future. He was my 7th monster and they get better and better each time.

Now, excuse me while I go and snuggle under the blanket in front of the TV.
Posted by jenny at 12:06 PM

Sorry you aren't feeling well, but I am so glad that I am not the only one who can take a little old ache or pain and turn it into a tumor!

My guess is that your system isn't used to digesting the processed foods. I have this problem a lot when I eat "heat and eat" foods. Especially meat-type ones. Heck, once upon a time I went for a couple of years without eating any red meat, and when I tried steak on a whim one day I thought I was gonna die! Hopefully you will be feeling better soon.....

I'm with barefoot gardener, sounds like your system just isn't used to processed food. Really hope you pick up soon... and that someone else picked up after Maisie while you were ill!

Barefoot and Sparx-- Oh! I am feeling much better today! It certainly helps that the temps here have reached the 50s and I was able to shoo the kids outside, open a couple windows and breathe in that delightful fresh air!! Thanks for your well-wishes, I will be staying away from certain foods from now on.

P.S. I still had to clean up after Maisie.. but only twice!

I logged on to tell you that I hope you feel better soon, and am delighted to see that you are ;). It probably was food poisoning. Most of the gastric upsets that people attribute to things like "stomach flu" are really food poisoning. It's an integral part of our "industrial" food system. Since we stopped eating those sorts of "meal in a box" kinds of foods, I've found that my tolerance for additives and preservatives is almost nil. In fact, I used to be a 2 liter per day soda drinker, and I can't even tolerate a couple of sips anymore. I guess that's a good thing ;).

Glad you're doing better, and the monster is awesome.