Sunshine on a Cloudy Day

Nearly a month ago, my Mom's home caught on fire. She had 2 cats; one was caught by animal control and returned to us; the other, Sunshine, disappeared. We all assumed she ran off, either from fear of the fire, or fear of all the happenings and goings-on of firemen and rescue workers tramping in and out of the house. We have been to the house multiple times since the fire happened, but never saw the cat again.

This past Monday evening, we got a call from the people that are packing up my Mom's things and they "found a black and grey cat in one of the bedrooms and to come and get it". What?! No way! You mean to tell me that Sunshine has been in the home all this time-- no food, no water?!

I got in the car and drove the 2 hours to my Mom's home, and since it was after 9 pm, I knocked on the neighbor's door to see if they would keep an eye on me while I was there-- the neighborhood isn't what it used to be, and for safety's sake, being in a dark house, I wanted to let them know I was there. The neighbor came in with me and we searched for the cat.

We found her. I can't believe we found her. She was huddled in among the empty shelves in the living room and looked so frightened. I called for her and picked her up-- nothing but skin and bones. She was so light-- skinny from not eating or drinking for more than 25 days. I'm sure she scrounged around, eating stray bits of cat food she found here and there, and drinking water from the toilets or puddles from when they put the fire out. It barely sustained her, who knows what would have happened if they didn't find her when they did.
I didn't tell my Mom until we had her at home, and then I sent an email telling her we had her cat. Her response made me cry. She was so relieved to have her safe, always wondering what had happened to her and where could she be and that she finally cried over everything: the fire, the loss of her things, the cat. I told her that she would see the cat when she came over on Thursday to stay with us a couple of days. 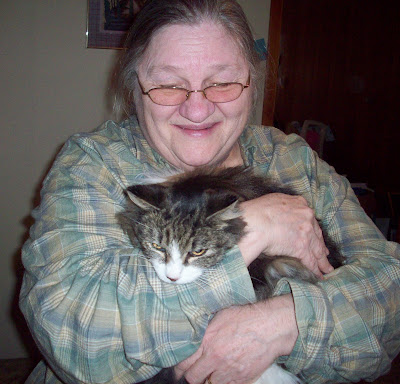 It was a happy reunion for Mom and Sunshine. She hasn't gained the weight back yet, still too soon after we brought her home, but she is safe now, and has access to plenty of food and water.
Mom is doing much better, she knows there is a large loss of her things, but now that her cats are accounted for, she seems better to deal with thing as they come. Now it's a waiting game: waiting for the people to finish cleaning/fix her home and then waiting for it to sell so she can retire and move in with us. It's a bump in the road, this fire. A big bump, but one that we will cross and we can continue on our way.
Posted by jenny at 8:51 PM

What a wonderful story. It's indeed a miracle

You may want to take the cat to the vet for a complete examination. With cats, prolonged starvation can cause this syndrome, hepatic lipidosis, also known as fatty liver.

Loved this story! Our cats are a big comfort to us at this stage in our lives. I am thrilled at the happy ending!

I have three cats myself...

By the way, I am looking forward to your changing photo of your blog, with first signs of spring coming (melting snow, tufts of grass showing, etc... ;o) )

I'm so glad she got both of her cats back out of that mess. That's really wonderful.

OMG that's amazing... poor cat - a trip to the vet is a good idea though... god the poor thing, she must have been so terrified. A big relief!

OH, poor Sunshine! I bet she is so happy to be with her "momma" again. Such a sweet miracle to come out of such sadness...

So glad that Mom has her cats back, even if a little worse for the wear! They will enjoy her loving them as much as anything!!

I'm soooo glad that you got her cat back home to be reunited with herI agree with Mishkazena about having the cat checked by the vet.

Thanks for all of your well-wishes and love for my Mom and her cat. It truly is a happy-ending and we are glad that she is now in our arms again.