While in Florida, we went to the Zoo with the family. The girls had never been to a zoo before and Hubby and I were looking forward to the girl's reactions to all the animals there. It was a very nice zoo and they had decorated for Halloween. There was to be a trick-or-treat event at the Zoo on Halloween, but we didn't go to that and we went the day before.

We saw a Speke's Gazelle (below) and he was a crowd pleaser, strutting around near the overlook and giving us a very good view of his markings and horns. There were several others resting in the shade in the distance, but this fellow was the only one willing to come close. 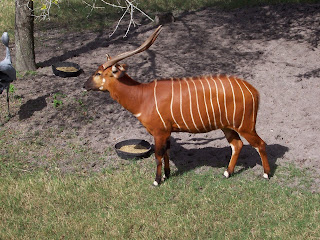 The girls were asking to see the Giraffes because someone had mentioned them and also, you could feed them if you bought some leaves from the staff. After viewing the other animals and repeatedly hearing, "I wanna see the giraffes!" We finally reached the Giraffe's pen. I think there were 5 of them, but we were so focused on the two that were stretching their necks and grabbing the small branches of leaves with their tongues that we didn't notice the other ones. I think all the kids fed the giraffes and after lots of picture-taking, I didn't manage to snap a single one with the giraffe's tongue wrapped around the branch. Oh well, I got a good close-up of his (her?) face. 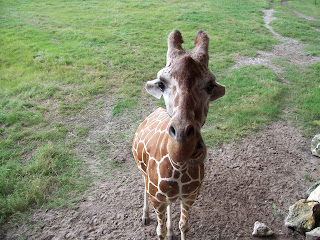 Being Florida, they had an exhibit with a jaguar. Beautiful creature and as soon as we came along, he got up to sleep behind some bushes, but not before I snapped this picture of him (below). They also had a black panther which Hubby was enamored with and reminded him of our black cat, BC. You could tell Hubby missed his cat while we were gone. 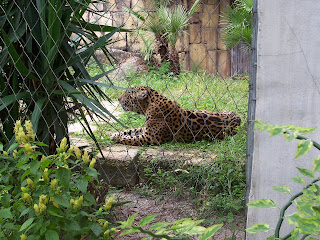 Little lizards were everywhere!! I remember living in Louisiana and catching lizards all the time. I have been living up north for so long that I forgot what it was like to have lizards around all the time. I snapped this one at the Zoo and I'm sure the penned animals were envious of his slithering freedom. 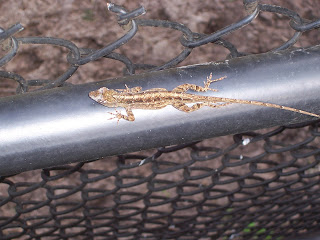 I will have to find out if there are any Zoos nearby where we live. Plenty of farms and small mom and pop type of places, but a real, bona-fide Zoo? The closest one I can think of is all the way in DC and that is too long of a drive just to go to the Zoo. We all had a great time and all the kids conked out in the car on the way back from the zoo. The next time we go back to Florida, I think another trip to the Zoo is in order, to see the rest of the animals that we didn't get to see.

I haven't been to the zoo in years! After reading this, I think a trip to the Ft Worth Zoo is in order!

Dana-- It really was worth the trip! How lucky my sister is to live right around the corner from the Zoo!

we have a yearly membership to the zoo here and love it. I have never been a huge fan of zoos as I hate seeing animals caged but the woodland park zoo has incredibly good habitats for the animals and watching Indy marvel at each creature is such an enjoyment. We go once every couple of weeks and are surprised to experience something new every time. Glad your girls got the experience. I'm sure it is one they won't forget.

We love the zoo. There is one within an hour of us and we go there at Christmas to enjoy the sights the most, very festive riding around on the zoo train and listening to carols. The annimals do not seem to mind either...but then how would I know if they did I guess...

Summer--I'm not a big fan of confining animals to cages either, and it was nice to see the Zoo in Fla was (to me) roomy enough for the animals. They really tried to mimic natural habitats and with the exception of the monkeys, I thought the animals had plenty of space. The monkeys, I thought, could use more trees and room to move, and they weren't too lively, but maybe it was naptime?

DJ-- Oh! I bet it's lovely with the christmas festivities! I would go often to the Zoo, if we find one nearby. I can't see driving all the way to DC (nearly 3 1/2 hours), although that Zoo is quite nice, too!