Rolling With The Punches 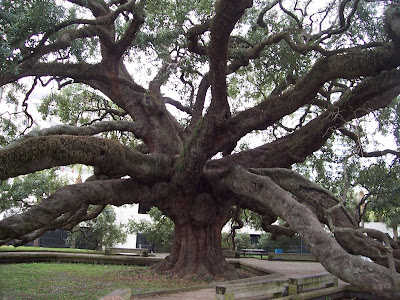 This Live Oak tree in Florida is over 200 years old. It was astonishing to walk up to this tree and admire the arching branches, humongous in size, and seemingly graceful in the way the limbs reach to the ground. This tree is protected and has become a tourist attraction. I can only imagine what this tree has seen, and the fact that it has survived over 200 years of hurricanes, disease, overzealous lumberjacks, termites and rot is no small feat. They built a deck around the base of the tree, to keep people from trampling the roots, but you are also welcome to climb and sit and pose for pictures on it's branches. It was an amazing tree to see and nearly impossible to capture the size of it on camera.

This tree has got me thinking about just how fragile life can be, but also how determination can win out in the end. We wake up daily to a new day, not knowing what life has in store for us. We can make plans and map out our days, but the reality is, anything could happen. Good or bad, the unexpected shapes our lives. It could be as small as running out of ketchup and milk and making an unplanned stop at the grocery store, then while there, bumping into an old friend which leads to an invite to dinner. Or as big as someone announcing an engagement which will then change the lives of two people and their families.

It's how you deal with the unexpected that shows what kind of person you are. I know some that can roll with the punches and it never fazes them. Then others that are very resistant to change and buckle at the slightest upset. I like to think I am somewhere in between, leaning more to the flexible side. I like stability in my life and tend to avoid confrontation or crazy over scheduling. I think I deal with the unexpected with a cool head and manage to turn it into: "since we're here...might as well!" On a smaller scale, it's like taking bananas that have gone over-ripe and making banana bread out of them. On a larger scale, it is losing a job that forces you to re-evaluate your priorities, figuring out what is absolutely necessary and what is simply, a luxury.

I made bread the other night, which gave Hubby an excuse to propose to me again when he put my wedding ring back on my finger. In all sincerity, he asked me if I would marry him, for richer or poorer, with emphasis on the poorer part. I replied, yes. I didn't marry him for money, I married him for love. And I do love him. For richer or poorer. A rejection letter came in today for a job Hubby interviewed for and we're rolling with the punches on this job searching. Tomorrow is another day. We're rolling.

I'm sorry to hear about the hubby's job, but the two of you have the right mind set. You'll pull through as you always do. Love is there and that's worth more than gold.

I love the way you look at the world. You inspire me.

My daughter's husband recently lost his job. They have a five month old baby. Things were tough for them before he lost his job. It's not "my" issue, per se, but she's my daughter, and of course what affects her, affects us all. I want to help, but it's hard knowing what to do, and where the boundaries between being helpful and being in the way lie.

I love reading your blog. You have such a positive attitude. I hope my daughter and her husband can "roll with the punches" like you have :).

Laronda-- I've always tried to look at the bright side of things. Doesn't do any good to me all gloomy and negative. It's an honor to be inspiring to you! :o)

Wendy-- Never easy when there are children involved. Not so bad if it was just one person, yourself, to support, but then when you have a family to think of, it is easy to get stressed out. I have faith that things will turn around soon for us, and that there is a lesson in all this. Best of luck to your daughter and her husband, I hope he finds something soon. Tell them I said to keep rolling! :o)

Your post brought a lump to my throat. Such a beautiful love you two share. Sending lucky thoughts your way.