My Baby Is Growing Up!

~*sob! boo hoo!*~ Does anyone have a tissue I can have? My baby is growing up so fast!! Oldest had a major milestone today-- She lost her first tooth! It caught us all off guard. There was no warning with this tooth, no loose tooth, no constant wiggling- either with finger or tongue. Don't you remember as a kid, taking your tongue and moving that loose tooth back and forth, wanting to pull it out but at the same time, fearful of the pain it might cause if you pulled it out before it was ready? There was none of that! I fed them soft tacos for lunch and then the next thing I know, I have Oldest standing before me with a bloody grin, a space in her teeth and a tooth in her hand! What?! How?! She was so excited, jumping up and down. I calmed her down and had her rinse out her mouth to make sure it was an actual, legitimate loss of a baby tooth and not an accident that caused her tooth to get knocked out. It's real, all right. *wah!* My baby is growing up!! 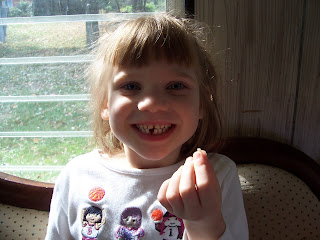 She was so proud of that tooth, and when we went to the store later on, she told everyone she met that she lost her first tooth, see? and she would pull down her lip and give the biggest grin she could and go "see?!" She told a fellow shopper, the cashier, the cart boy, even the guy at the gas station. I let her enjoy the day because, after all, to a 5-year old, losing a tooth is big news!

What's the going rate for a tooth these days?? A friend told me she wanted to put a $5 bill under her daughter's pillow but her husband thought it was too much and got a $2 bill instead. I remember getting a quarter for my teeth. I think a dollar bill will be good.

I remember when I discovered my teeth in my Dad's wooden treasure chest when I was snooping one day. I opened the lid and in one of the little compartments were mine and my sister's baby teeth. I put 2 and 2 together and realized that my Dad was the Tooth Fairy. I was old enough to not get upset and I had lost all my baby teeth for a few years by then. I thought it was cool that he had saved our teeth all those years and I know it was his way of remembering us every time he opened his chest. I'll squirrel away my children's teeth and then maybe someday I'll put it where they could find it if they ever snooped through my jewelry box and see if they say anything. For now, though, I am looking forward to morning, when Oldest discovers that the Tooth Fairy had come last night!
Posted by jenny at 11:16 PM

Ah how sweet! First I was all excited for Oldest but then I got all teary when I read about Husband phoning the tooth fairy and you finding your tooth in your Dad's wooden box....you've got special memories of it and now Oldest will have some to treasure too. What a lovely family.

AAAWWWWwwww that's so cute! And what a good picture :)

My mom still has my teeth and every once in a while brings them out to show me. They friggin gross me but she thinks they're wonderful. Ok so it makes me mushy and glad that she loves my nasty gross baby teeth, I have to admit it. :)

I always had to leave my tooth in a glass of water on the kitchen table. I guess my parents didn't want to wait too long for me to fall asleep :) I think my little brother get $5 or $10 for a tooth these days (I'm sorry but that's rediculous) My kids'll be getting for wet quarters in a drinking glass just like me.

BTW I LOVE the idea of you keeping the teeth where you know they'll snoop when they're older. That's sweet :)

man, they grow up so very very fast! This is too sweet:)

Aw! Smoochie little snaggle tooth! I LOVE LOVE LOVE her little grin. That first tooth made me cry and cry here. I have to say though, it's cuteness is only matched by the day that both of the front teeth are gone. Good stuff :-)

I remember losing teeth. Do you Americans tie one end of a string around loose tooth and the other to a door knob and then tell the child to stand still while mommy or daddy slam the door to pull it out? No? So it's just us then?

DJ-- Thanks Dj.. I hope that the girls will have good memories when they look back on their childhood years. This blog will be a good starter for those memories when I print it into a book for each child.

Lindy-- Yeah, I think $1 is just the right amount, because unless you want them going to the gumball machines, there is almost nothing you can buy for less than $1.

Summer-- They sure do!! I am trying to let it all soak in so I don't forget!

Blue Yonder-- I look forward to the two front teeth gap. Hubby is already singing, "All I wanth for Christmuth isth my two fronth teethth..."

Krissie-- Oh yeah, we do the string around the doorknob trick too! I remember it actually worked once and I never did it again after that!