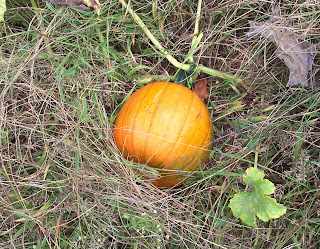 Thanks to some animal, most likely a bird, for planting the pumpkins for us! I had bought pumpkin seeds but never got around to planting them. I didn't plant them at the same time I planted everything else, because then I would have pumpkins in August. So I plant around mid-July and then they are ready around September-October. But thanks to a bird that probably lost his lunch, a seed sprouted and an unknown vine started to grow. I knew it was from the squash family, but which squash was it?? I anticipated the flowers and then a small fruit growing, but every time, the fruit would fall before it developed into something recognizable. Or the flowers would fall off after blooming. Then, finally, a fruit that stayed, and grew. And grew. A pumpkin!! Then in another area, another vine started to grow and another pumpkin appeared! We have 2 lovely pumpkins now, one to carve into a jack o'lantern and the other to be processed into pumpkin puree for making pies later. 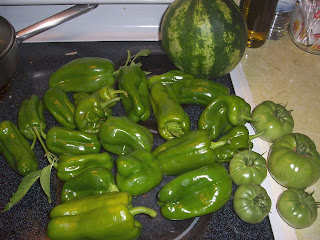 I finished the last of the harvest from our garden. While I was busy with the store and not tending to the garden, it looks like some deer ate the tops of my pepper plants. They also broke open a few watermelons and the bugs and bees were having a picnic with the leftover watermelons. I found one intact watermelon and brought it in, along with the rest of the peppers and a few green tomatoes. I found deer droppings all over the garden area and I know that if I didn't pick what was left, there would be nothing left later on. I spent the better part of yesterday evening chopping the peppers and freezing them in small containers. The watermelon was dessert and the tomatoes will sit while I patiently wait for them to ripen.

Today we went into town to run some errands, shop at the thrift store and then the grocery store. The prices at the thrift store have been rising and I am a little disappointed with their pricing system, if you can call it that. I spotted a large doll house with no price and I asked a clerk who took it in the back and then returned with a price of $3.49 on it. Score! I balanced it on the cart and went merrily on my way. Hoping to continue my good fortune, I spotted a small scooter and it was priced at $20.99!! Wha??? Pass. Spotted a rocking helicopter toy and it was priced at nearly $30. No thanks. A chalkboard easel (missing the chalk and eraser tray), $19.99; castle bookshelf/toy bin, $24.99; Hippopotamus Lego eater picker-upper, $9.99. I realize the thrift stores want to make their money, but how are they going to make any money by overcharging for USED items?? I think the general rule of thumb for pricing used items is 1/4 of the original price and if in extremely good condition, 1/2. Many of these items needed a good cleaning and many came without accessories or missing parts. The Lego hungry hippo toy came without any legos. The castle bookshelf/toy bin had most of the decorative stickers torn off. I would overlook those flaws if the price was right-- I have a bunch of legos at home the hungry hippo could eat. I would clean off the sticker residue and put the castle to use.

The thrift store's saving grace today, was that $3.49 doll house. I've seen it at full price for $99 and it was in pretty good shape, although missing all the furniture and people. I'll find them in my future hunts. I also scored some great vintage green flowered sheets and was only charged for half of the price. Hubby found some toy cars for the kid inside him and we felt pretty good about what we got, even if we were kind of disappointed we couldn't afford the other items. There will be other days and even better bargains!

And speaking of bargains, when we went to the store on Monday to drop off a few items to sell, many of our consigned big items have sold already! I picked up a big slide for $15, cleaned it up, slapped a $150 price tag on it and it sold for just that! Picked up a great train table with storage bins underneath for $5 at a yard sale, cleaned up the crayon marks, and it sold for $50. Bought a HUGE doll house for $10 and it sold for $75. My worries from last week are quickly fading and being replaced with excitement and the success of the resale business. It makes all the hunting at the yard sales all summer long (who am I kidding, I love hunting at the yard sales!!) and filling up the basement corner with "merchandise" worth it! After I find furniture for the doll house I picked up today, it'll be sold for $50. Not bad for $3.49!
Posted by jenny at 8:52 PM

You've got such a nack for this kind of thing.

Just wanted you to know, I'm still reading you. :)

I love volunteer plants! We had a bunch of volunteer pumpkin vines this year, too. Unfortunately, they crowded out some of the crops we wanted (like cucumbers), but it was fun to see them.

Love your bargain hunting stories. I like going to the Goodwill store. It's fun, and I can be a little less restrained, although not much :). We found several 18" dolls (American Girl knockoffs) at our local Goodwill for $4 each. An AG doll is almost $100 new! My girls were happy ;).

I admire people who can grow there own, I can't even keep a house plant alive! Great going on the reselling used items, it just shows what a bit of TLC for these items does. x

You are such a Bargin Bad-Ass!! Is there a blog award for that?? You deserve it!

Your veg harvest loks fab and the watermelon too, yummy. We have had no luck with our pumpkins and will have to go to a 'pick yer own' farm I think.