Halloween costumes this year are pretty easy for me. The kids have all picked something that requires minimal help from me, very little sewing, and very little store-bought accessories. Win-win if you ask me!
Though I like to sew, sewing for the kids is not always easy, especially when they breathe down my neck, ready to snatch away finished product as soon as I clip the last thread. Or I can barely get them to stand still while I measure and check, double-check and triple-check the fit.

This Halloween, Evelyn wanted to be a ghost, then a zombie, and as of today, with her looking like she's coming down with a cold and possibly not going trick-or-treating tomorrow, we've decided she'll use her warmest pajamas (with something even warmer underneath), dot her face with freckles, put her hair into pigtails, and she'll carry around a teddy bear, as if she is a little girl ready for bed. Much easier and less complicated than a zombie. Hopefully she'll feel better tomorrow, fingers crossed.

Gretchen is going to be a witch, using an old costume we already have. The only thing we needed was a witch hat, which we found in the dollar aisle at Target. I'm making her wear tights and a heavy black skirt underneath the costume for warmth, which she is protesting, but as soon as I mentioned, "no tights, no trick-or-treating," she quickly agreed.

Sylvia is a cat. While yard sale-ing one day, I jokingly held up leopard-print pants and shirts and asked if anyone wanted them and Sylvia immediately grabbed for them! Shocked me, for sure. She's been wearing them non-stop and all I needed to do was make a black tail for her and the Target dollar aisle gave us leopard-print cat ears headband. Make-up on her face for whiskers and a kitty nose and we are done!

Peter wants to be a shark. He loves anything fish and for months he has been talking about being a shark.
Easy enough-- dress him all in grey and I'd make a grey skull cap from a grey shirt and a shark fin to attach to the back of his shirt. But it's cold now, thanks to Hurricane Sandy, and I realized the fin won't be visible underneath his coat. Thinking, thinking.. light bulb! 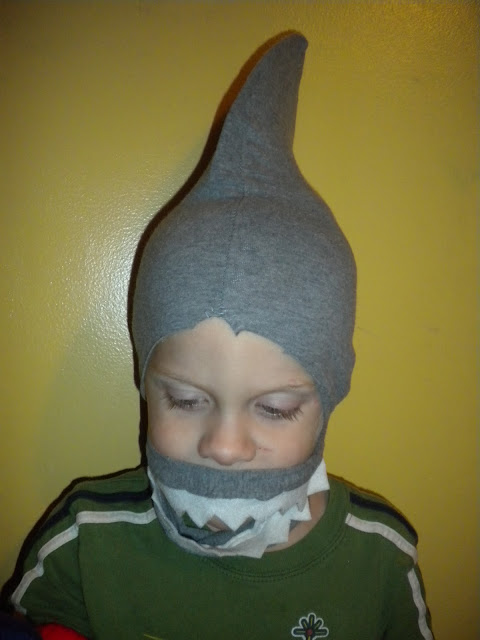 Using an old grey shirt, I cut the long sleeve off and used the wider top part as a skull cap. Cut a thick card board fin and fitted it inside the cap and traced the shape, sewed along the shape and a shark fin cap was born! He loved it! Ran off as soon as I slipped it on his head!

My sister mentioned seeing a teeth-y mask made with a paper plate, but I thought I could do one better using thick white felt and a bit of the old shirt. I measured around his head and cut a slit into a rectangle piece of fabric, sewed a length of felt on both sides of the slit, turned and stitched a top-stitch to keep the teeth from flopping once on. Added some snaps to the ends to attach in the back and it's pretty cute. 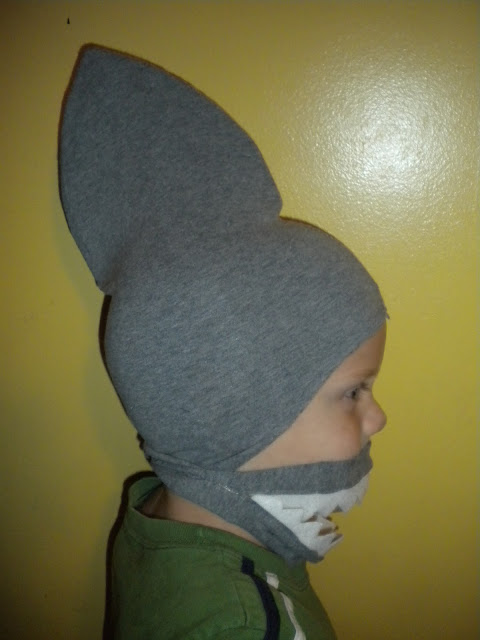 Of course, now that I've finished the sewing bit for Shark boy, he declares he doesn't like it and won't wear it. -sigh- Andrew said he won't go trick-or-treating if he won't wear it, so Peter has changed his tune and loves it again. Fickle kid!

You are so creative! I love the shark head. I know a couple little boys who would wear that all winter as their hat/scarf combo!