I still can't get over how much a haircut can change the look of someone; in this case, Peter. We had been talking for some time about wanting to cut his hair, but hadn't gotten around to it. Then Andrew bought a new razor to replace his old one so we decided it was time to give Peter his first haircut. 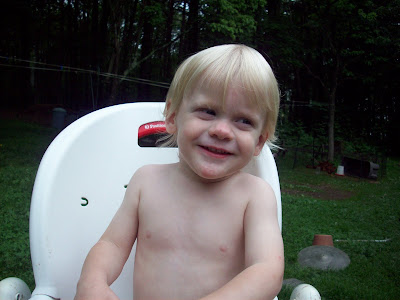 We set him up in the highchair outside.. Before picture. 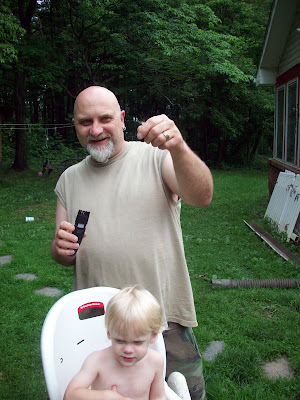 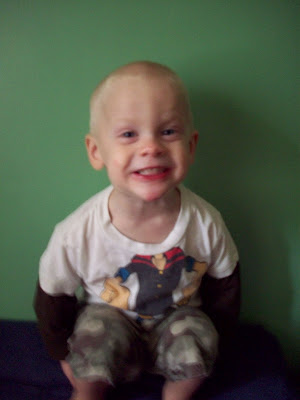 Hello BOY!
This blurry photo is fitting because ever since he has gotten his buzz cut, he has been constantly on the m.o.v.e. It's like he has totally shed the cutie-pie baby persona and became this cute little boy that just runs and runs and runs!
He looks so different now, and still so cute! He looks so much like the old pictures of Andrew and my Dad when they were little boys-- little blond-haired boys with buzz cuts. I ought to do a side-by-side of them one day.
~

LOL WOW!!! Peter is such a cutie! I like him better with the buzz. LOL

Teena-- Isn't he cute! I like him with the buzz cut too! I wanted to ask you to show me how to cut his hair, but I figured it out-- pretty easy. Peter didn't seem to mind it at all. He cooperated mostly until the end, when we made a mistake and gave him a lollypop before we were done and he got hair on it then he was pretty peeved about a hairy lollypop! lol