A Girl and Her Chicken

That Evelyn, she is a stubborn one. She has a mind of her own and I could tell her a thousand times not to do something and she goes and does it anyway. Part of me is glad she is her own individual, but there are times when all I want is for her to listen and do it.

One of the things I am forever telling her, is to leave the chickens alone. She'll say, "okay mama", and then turn around and pick one up. ~sigh~ I don't mind too much when she is being loving towards them, but half the time she has a mean streak and just wants to see them jump and squawk when she throws a stick at them or chases them around the yard. Our chickens are friendly birds and they come running when one of us goes outside, usually looking for scraps or a hand full of feed. 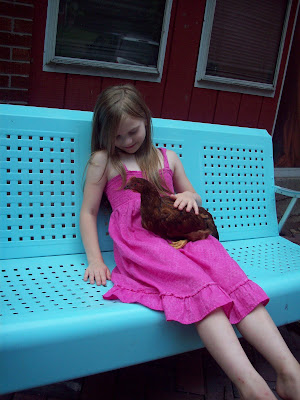 Here's Evelyn in one of her loving moods towards the chickens. She has one of the younger ones, either the Rhode Island Red or the New Hampshire Red-- I can't tell the difference just yet. 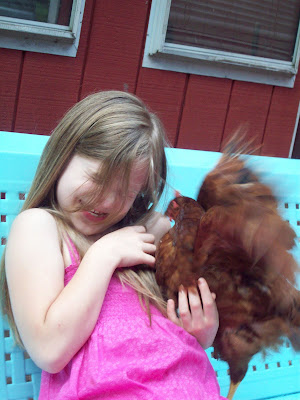 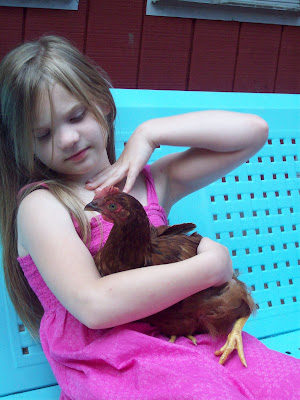 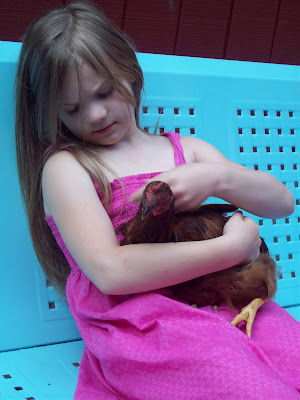 When she is content to sit with a chicken on her lap like this, I don't mind at all when she wants to "play" with the chickens. I must admit though, she does very well when it comes to helping me with the chickens-- closing the coop for the night, gathering eggs, feeding them, etc. I appreciate having her help with the chickens and it's one less thing for me to do.
-
The younger group of chickens are growing quickly and it's looking like I have 4 roosters and 5 hens. Another month or two and I'll have to butcher the roosters. There is already a mean one in the bunch and he likes to peck. I had them in a large bin when they were chicks and as soon as it warmed up during the day and night, they were put outdoors with the bin. I think that was a mistake, I cannot get them to go into the coop at night. The older chickens want nothing to do with the younger ones, but I suspect that will change once the younger hens are noticed by the head rooster when they're of age. Or at least I hope so.
-
In the mean time, I have to wait until dark, when the chickens are settled in the bin, then stick the whole bin into the coop for the night. I tried to take the bin away, but they just settled in a different location outside of the coop which made more work for me to gather them and stick them in the coop, so I put the bin back. I put the bin right by the door of the coop once, and they chose to settle by the house. Any ideas? I still haven't put up a fence, though I am thinking about it these days.
-
Egg production is at a standstill right now and I'm lucky if I get one egg a day. I don't go egg hunting in the woods with all the poison ivy at their peak so I have no idea if they are laying eggs out there or not. Do chickens lay eggs when they are molting their feathers?? I read somewhere they do not... something about having to grow new feathers taking up all their "energy" instead of making eggs. True? I sure miss having a fridge full of eggs. I'll never moan about having 7 dozen eggs in the fridge again!

Yep you got it - molting = no eggs :( But lol at least now you know that they're not laying in the woods. :) No worries, in a few weeks they'll be back up and running and you'll be trying to figure out what to DO with all those eggs! :D In the meantime consider it a break for your colesteral levels - Mother Natures way of evening things out ;D

Actually if you leave an egg or place a fake egg in one of the nest boxes, it will encourage the hens to lay their eggs there. See if that works for you. :)