Every kid goes through that period where they are searching for who they are-- their style, their signature, that thing that tells the world they are who they are. At 13, when I went into high school, I wasn't too sure of who I was, except that I was a deaf girl about to enter a school for the deaf, and for the first time, I would be equal to my peers. I hoped that I would no longer have to endure taunts from hearing classmates or be picked on for my K-mart clothes or be teased for not saying a word correctly.
-

This, was how 14 year olds dressed back in 1988.
Please note that the jeans and the jean jacket are K-mart issue.
How are today's 14 year old girls so gorgeous??? None of the girls I knew back then look like the girls do today!
-
The buttons on my jacket ranged from:
"SSDD- Same Shit, Different Day"
"I'm not Deaf, I'm ignoring you!" (ha-ha!)
A picture of Spuds McKenzie
-
I remember how I felt most of the time that year.. like I was a fat kid with braces. I had an aunt and uncle that always told me that if I wore make-up I'd be so pretty and to dress better, which only made me more painfully aware of myself and I figured I must not be very pretty for them to say that to me. I remember pulling my already big shirt out to be sure that you couldn't see my tummy when I sat down and my long bangs would obscure half of my face.
I did manage to get my first kiss at 14. Some of us girls and boys would go behind the dorms and have make-out sessions. I don't know about anyone else, but I never went beyond kissing.
-

This is me at 15, the summer between sophomore and junior years. We were dressed up for a Sadie Hawkins party and this was my version of country bumpkin. It was fun that day, but then I was caught in that anxiety of trying to "catch" a guy and hoping he would have fun with me and not be all depressed that it was me that got him. I never did figure out if he was cool with me-- after our "marriage" we went our separate ways.
- 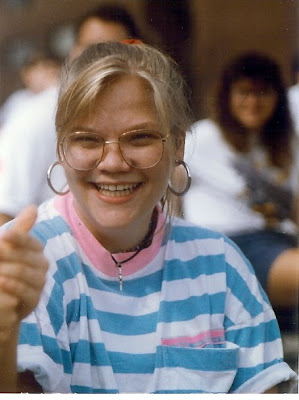 At just-turned-17, I was still searching for my style. I was wearing a shirt from a guy I liked. It was Homecoming weekend at the university and he was a freshman and I was a high school senior. I stayed overnight in his room. Nothing happened- I slept on the floor, but the next day, I needed a shirt, so I swiped his. I wore that shirt out. How many times have I thought I was the coolest chick wearing a boys' shirt??? I figured out here that I liked silver jewelry, so I had the big hoops and silver rings and necklaces. I was all about the silver!
-

I went stag to my senior prom. No one asked me. I wanted to go, it was on a cruise ship, so me and 2 other girls decided we'd go together and have fun anyway. I was starting to discover my style-- hippie chick. This was my prom outfit. I felt so daring, wearing a see-thru blouse, belly showing, mini-skort. I went to Georgetown to buy this outfit at all the hip shops. I had on dangle-y daisy earrings, a peace necklace, my hair parted down the middle... I felt like I was in my element. I was also kind of nervous, what would people think? How would they react?
- 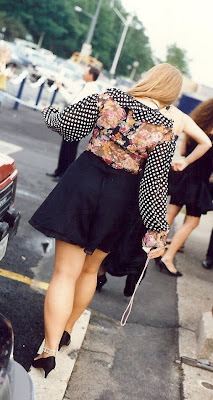 Looking at this picture of me, about to head onto the boat, I looked so sexy! Look at those legs! I wish I had more confidence in myself back then. I wish I knew how beautiful I was, instead of worrying about what other people thought of me. I wish that when I worked up the courage to ask a guy out, only to get told that he just wanted to be friends, that I said to him, "your loss", instead of feeling crushed and that girl inside of me just wanted to wither away and disappear.
-
No one danced with me that night. I spent a lot of time topside, smoking my cigarettes (yes, I smoked then) and watched the sun go down over Potomac River. I took pictures for other people, posed for a few, but I didn't dance a single dance.
- 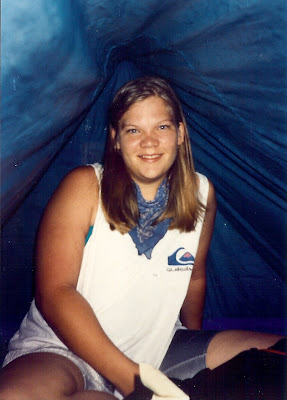 After graduation, my sister and I participated in a 'Bike Across Virginia' ride. My sister was an avid biker, and I wanted to be like her. I wanted to be athletic like she was, so I tried out for the basketball and volleyball teams because she played, but I never made the teams. I could ride a bike though, so we signed up and spent 5 days riding the Shenandoah Valley with hundreds of other riders. It was a great trip, I learned I didn't have the stamina my sister had, but we had so much fun together.
-

I didn't know what I wanted to do after high school. I found my style, but now what was I going to do??
-

love this post! this brings back a lot of memories at MSSD! i entered MSSD with absolutely NO sense of style. thanks to a stylish roommate, she encouraged me to borrow her clothes, gave me tips, etc. i went to my senior prom solo too...danced with no one, either. it was a strange time in my life. i need to do a post on my blog similar to this! =)

You, my dear, are beautiful both inside and out and don't ever let anyone tell you any different!!

I loved this post!! I remember going through the same thing...trying to find who I was....my style ended up echoing the music I liked. I was, and still am, a Indie/rock chick....I wore lots of black (my Mum said I looked like a stick of liquorice!!). I'll have to dig out some old photos too....give you a laugh :-)

In that picture of you with the "boy's shirt", you look just like Leann Rimes, who is beautiful. I don't know what you mean about girls in your day not being gorgeous ;).

Whoa!! Look how young you looked!! And look how you had transformed! A young awkard girl to a super duper Mama of 4 who know how to do everthing!! Whoa!! LOL I'm proud of ya!

Where DO the girls these days get their style!!? LOL I had a shirt a lot like your striped boy shirt - OMG and it had the same stripes but each sleave was a different color than the actual shirt part - I think Teal, purple and tourqouise!? (lordy)

I honestly can't wait to read the next part coming :)