With 3 roosters, the poor hens were getting ganged up on. I have seen one rooster grab a hen and try to mount her, only to have another rooster chase the first one away and then try to mount the same hen, and I swear, I am happy when the hen gets away before anything happens between her and the roosters. Poor hens. The hens stick together and go off into the woods and the 3 roosters mill about in the yard, chase my feet when I walk by and generally make nuisances of themselves.
Something needs to be done about those roosters. 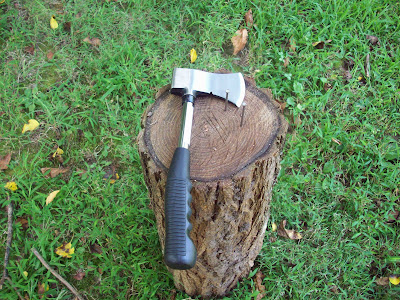 I decided it was time to take action and butcher a rooster-- on my own. No Uncle here to help me this time around. To say I was nervous is an understatement. 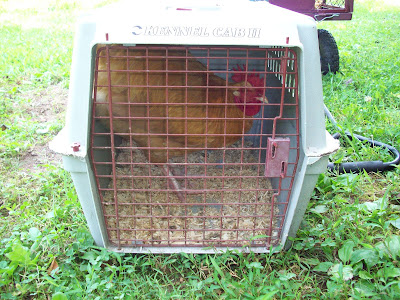 I decided on the big Buff Orpington rooster. He was a pushy bird and was always pecking the hens on the head. Poor girls. They'd all be gathered around me, eating the scraps I tossed, and then the Buff would all of a sudden peck someone and the hen would squawk and run away and he'd move in and eat and the poor hen missed out on the scraps. His actions determined his fate.
-
I got the area ready for doing the deed. Since my Uncle wasn't around to chop the head off for me, and I didn't have anyone to help me hold the chicken still, I used a tree trunk with 2 nails to slip the neck into. It took me a good 10 minutes to pysch myself up for it. I said a prayer of thanks for the chicken and then I did it. My hands were shaking afterwards, and I busied myself getting the hot water and my work area ready so I didn't have to watch the death dance.
-
It was different without my Uncle there. When we worked on the first one, I was focused on watching him and how he did things, where he inserted the knife and how to cut... This time, I was on my own and I felt a little anxious and shaky, I had to take deep breaths and reassure myself that I would do fine.
-
I dipped the chicken into the hot water and started pulling the feathers off. It definitely took me longer alone, than when my Uncle and I worked together on the last one. 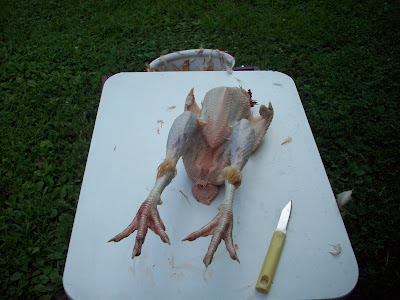 It took me about 45 minutes, from the moment I chopped his head off, to getting it into a zippy bag in the fridge. I need a higher work table to do this next time, as my back hurt from being bent over. I think next time, I'll just bring the chicken into the house after I pluck the feathers off outside. The kids snuck outside to watch me and they came out in time to see me pulling out the innards. I told them they could come closer to watch and they did. I forgot about the head still on the chopping block until Middle said "Look! There's the head!" Eeep! I quickly went over to get the head and tucked it under the pile of feathers to be buried later on. The head is not pretty to look at, and knowing my kids, they would be creeped out by seeing it. Maybe later, but not now.
-
All in all, I think I did ok. I know the next one will take less time to process and as I learn and go on, each time I butcher a chicken, I will get more efficient. I already learned I used the wrong knife, and will change that for next time. I already decided, next time, I'll process the chicken in the house on a proper counter top. Just those 2 changes will make a difference.
-
I have one more rooster I need to butcher. I have to decide which one. Both are good roosters, they keep the hens in check, I just need to figure out which seems the better one and then butcher the other one.
Posted by jenny at 12:23 PM

Life is cruel to males... blame it on testosterone, not males, which make them do, hmmm, stuff to females.

Oh well. Males could retort "blame it on estrogen which make females do stuff to males".

Brave Girl!! Very brave!! whew (I'm not sure if I could have done it)
xoxo

Funny, my senor said exactly the same thing I said when he read your story... Brave Girl!!

I'm not sure I would have been able to do that!! Well done hon...as everyone else has said, your a brave lass :-)

And awwwww that reminds me of my Dad and when I was a kid and I would stand and watch him do that come "harvest." I was so facinated by how long they really would run around without a head.

Karen-- I don't blame the males for trying to do what comes as natural instinct for them. I just feel bad for the poor hens who have to endure 3 roosters trying to "get down" with them! Must be tiring for the hens! :o) For me, with only 6 hens, 3 roosters are just too many, so it's a farm way of life to cull them out.

Teena-- Thanks! I felt drained afterwards... didn't want to do much yesterday and if it wasn't for the kids, I think I would have watched TV all day. Oldest is telling me to butcher another chicken on Friday!! I think I'll wait until Hubby's next day off to do that. xoxo

Lindy-- I know!! It's fascinating to me, too, to watch them hop and dance afterwards. My Mom was scarred by watching her mom do it and doesn't eat chicken unless it's smothered in some kind of sauce, but the way she tells it, made me imagine something far worse than what actually happens. What surprises me is how little blood there is. xo

Good job! I have done that myself. Honestly, I hate pulling out the innards more than killing the chicken!

Coco-- yeah, the innards are gross. I jammed something under my nail when I was pulling guts out, maybe a rib? Nail still hurts a few days later. I'll have to be more careful next time.

Wow. I can't believe you got the rooster on the block with his head between two nails AND chopped his head off.