There is Always One

Middle is the picky eater of the family. Almost every meal is a struggle to get her to eat what is on her plate. I had a particularly hard day with her when she refused to eat all 3 meals that day. I get frustrated when she gets like that and she slouches in her chair, or turns around to look out the window, or slips out of her chair and tries to disappear from the table. 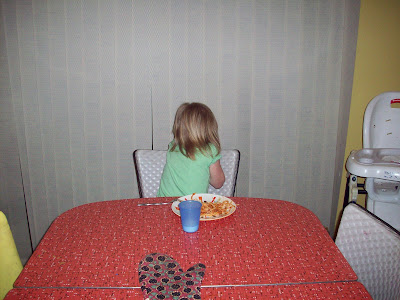 I made spaghetti this night. Usually a winning meal with all the kids, but not this day and not this kid. I pleaded and raised my voice, I tried negotiating and threats, all to no avail. She turned her back to look out the window and so I closed the blinds. Even Baby ate more than she did. All she did was play with the noodles, but not one passed her lips. 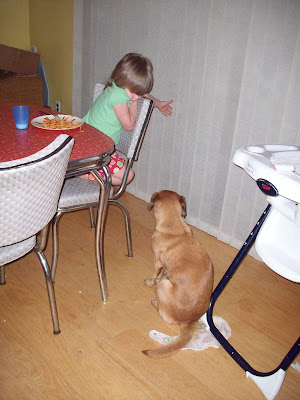 Maisie the dog seemed to be telling her that she'd eat her spaghetti if she didn't want it.

I try to be reasonable, I know what foods she loves and what she doesn't care for. We tell all the kids that they are not allowed to say "eww" until they taste it first. If I make something they don't like, they have to eat at least 3 bites. If I know they like it, but won't eat, then they have to eat bites according to their ages-- Middle is 5, she has to eat 5 bites.

I'm aware that sometimes kids go through periods when they don't eat much. They'll eat when they are hungry. I try to have healthy snacks for in between meals and they are not allowed to eat 2 hours before a meal. We usually eat around 6-6:30, so no snacks after 4.

Today, we had cantaloupe for breakfast. Usually devoured by all the kids instantly. Middle sat there, pouting over her plate. I got busy, took the scraps out to the compost pile, checked on the chickens, came back in the house. Middle came to me with tears in her eyes. "I don't want cantaloupe, I want cereal". Fine, I put the cantaloupe in the fridge, gave her cereal. I'm picking my battles. I'm not going to force her to eat something when she is willing to eat something else. It's too early in the morning for a battle of the wills between Middle and I.

Very frustrating. I have been there. Creating a battle of wills over food can be a disaster. And it can cause eating disorders when the kids get bigger.

Through trial and error, I found a better way. As long as you know the food is not so distasteful that it will cause them to gag, simply present the food. Don't fight. If they want it, great. If they don't want it, don't make them eat. But don't provide them with alternative food. Simply state "This is the meal. Eat it or not." Eventually they will eat. They will not starve themselves, and going without a meal every now and then will not kill them. Stay with your routine of regular healthy snacks, and nothing less than 2 hours before a meal.

They need to be allowed to control what goes into their mouths. But you need to be in control of what is offered.

Oh dear...no answers to giv eyou. i was going to say maybe she is getting ill but I guess not if she ate cereal just fine instead. xo

I always thought that deaf people were more picky about their food because of their stronger taste buds. Not true! I have been thru 3 generations now, including my own generation and I have never found an answer or a solution. Deaf or hearing, makes no difference! Now, finally, my middle grand daughter, who is 17 decided to be a vegetarian. I goofed when I made clam chowder and put (eek!) bacon in it. But she promptly went to the freezer and took something out that was to her liking and warmed it herself. This could be a solution in other families who have kids with all kinds of food hangups. If they cannot eat what the rest of the family eats then they can invent an alternative (on their own). I recall the old days at the deaf school, growing up, the kitchen could not satisfy everyone! One student I remember used to mix cottage cheese into his mashed potatoes!

This is a very interesting subject and I would love to see more posts on it!