Adventures of the Chicken Nuggets

It was a warm-ish day today, so we brought the chicks outside to play a little. We have outdoor cats, so a pen was necessary to prevent any thefts of baby chicks by the cats. 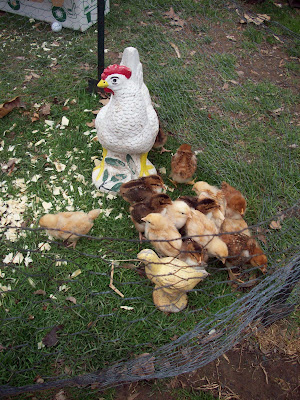 Oldest wanted to put the concrete hen and baby chick inside the pen and see what the chicks would do. Maybe they would think it was their mother? Another fellow chick? They didn't seem to notice at first... 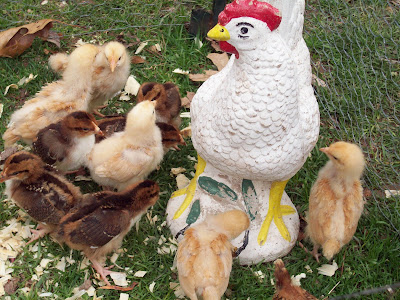 Then as they gathered around the hen, they seemed to look at it and I wondered if they recognized it? Mama? Mother? These chicks were hatched in an incubator, so as far as I know, they've never seen a full-grown chicken. 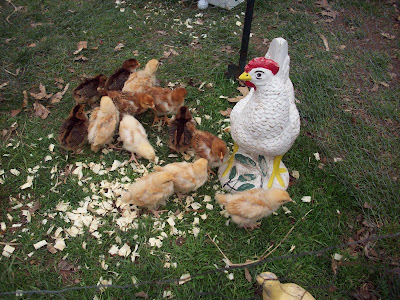 When it didn't seem to respond, they continued on with pecking the ground and moved away from it. They weren't fooled. To them, it was just an obstacle in their way of pecking for food in the grass. Smart chicks.

That so reminds me of the movie, "Milo and Otis", where Otis hatches an egg and the chick follows him around saying "Chicken Mama, Chicken Mama!"

Awwwwwww baby chicks! I remember how much I loved our chicks when I was a kid. They get really friendly.