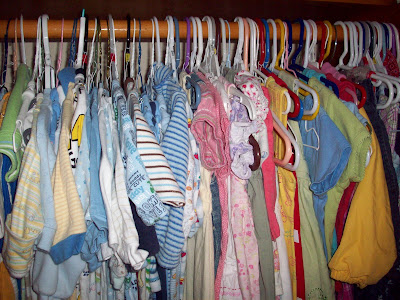 Right now, I should be working at the kids' consignment shop. The shop opened yesterday and I was all set to work the next 6 weeks. I gathered up all the clothing the kids can't wear, the toys they don't play with, the books they don't read, and some of the maternity clothes that I won't need anymore. I sent an email to the Boss and told her of my intentions, that I planned to work for her again and was looking forward to seeing her and everyone else.

She replied back and said that things were different now, that the store space was changed and would probably be difficult for me and the kids-- no heat and no bathroom anymore. She also said she had a new policy that staffers had to work 20 hours per week to qualify for first crack at shopping and the freebie clothes at the end and the 100% profits in the sale of your own items.

I was half disappointed and half expecting it. The last sale didn't end well and I had a feeling that it was going to be my last time working for her, but I admit, I had hoped it was because she was sick and that things would go back to the way they used to be. I had hoped that since I worked with her for 6 years that she would make an exception for me, especially since I have to drive 3 hours round trip just to get to the store. There's no way I can work 20 hours per week for her with my Husbands' schedule and not take the kids with me. And driving all that way, for only 50% of the profits?

So it's settled then. I won't bother pricing the rest of my items and we are going to try and sell them ourselves-- either at a yard sale or a flea market booth. We use the money to pay our car insurance, so it's not an option to donate them. I have to say, it's a load off my mind knowing I don't have to work for her and make the long drive to get there.

My kids get stressed out by the store, too. Middle starts to pull her hair out and leaves a small bald spot on her head until a few weeks after the sale is done and then finally her hair starts to grow back. All the girls pick up bad behavior from the other kids there, and start back-talking, getting sassy and picking up language that the Hubby and I don't use. Plus, our eating habits go out of whack and we all end up feeling poorly. And usually, the kids get sick from the other kids there, and our family has been lucky in that we don't get sick very often.

I'm a little sad to see it end, it's been a great sale to participate in all these years, and I have managed to make quite a bit of money selling stuff there. I've met some great people and made new friends, but nothing stays the same forever. It's just my time to move on and start something on my own. I'm content with my decision.
Posted by jenny at 9:59 AM

Change can be a blessing in disguise. Look for the silver lining. :)

LaRonda-- I've always been the one to look for the silver lining in life. Nice to see you think the same way! :o)

End of an era hey? I agree with LaRonda though, could be the start of something new. Any chance of selling on eBay or is it not worth it?