My children have too many toys. They go to their playroom and dump out every single bin, filled to the brim, and make a mess all over the floor. I'm all for creative play, but I would appreciate it if they'd pick up afterwards. The way they play leaves too much destruction behind because they step on something and it breaks; they trip and drop something and it breaks, or they just push something off the shelf to make room and it breaks. Grrr!

A couple months ago, I went through the toys and pulled out the broken, the dirty and the lesser played with toys. It amounted to 5 large boxes. Yes, they have too many toys. It's easy to amass toys when you go to yard sales and people see cute little girls and tell them they can have whatever they want for FREE. I want to throttle those people. Thank you for your kindness, but my children don't need anymore toys. The few times I said "No, Thank you", the look they gave me made me feel like some sort of terrible mother that deprived her children of toys. I've found it easier to let them pick a toy-- it keeps them busy in the car and then I'll pluck it out later on.

Then two days ago, the husband and I went through the toys AGAIN, and with the girls, we thinned out the playfood (who needs eleventy-one million toy plates and 23 individual french fries?!), let them pick one barbie each with 5 outfits each, 2 baby dolls each, 3 plush toys each, left the legos, took the blocks, took out all my vintage little people toys that I was so nice to let them play with and discovered lots of damages to several buildings (sob!), and then swept up all the bits and pieces and vacuumed and ahhh! SO much better.

That said, when it was time for Youngest's birthday, we didn't have a party so as not to encourage more toy gifts and really, they don't need a party for every birthday, do they? (that's not a question, don't answer that!) But then, the night before her birthday, I had a bit of mommy guilt because we didn't get her anything-- they're still playing with their Christmas gifts. So I brought out the sewing machine and spent the night trying to make her a doll like I made her little cousin for Christmas. 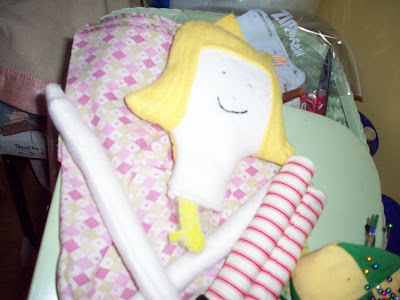 This is as far as I got before I called it quits at one o'clock in the morning *yawn*. I culled ideas from different handmade dolls across the 'net and made this without any patterns. I was vexed, to say the least, but I'm pleased with her hair and face. 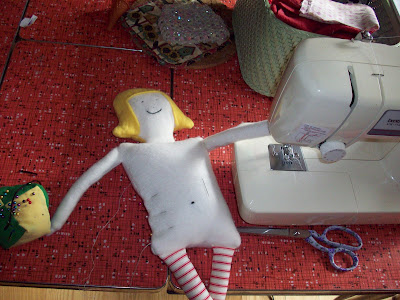 I didn't finish on her birthday, but she knew she had a birthday doll coming to her. She saw the head, arms and legs and after finding out they were for her, kept asking me when I would finish. I knew then that I couldn't put it off or I'd go crazy with hearing her constantly ask: "Is my dolly done yet? Are you done with my dolly? Where's my dolly?"
*
I got busy on the doll today and finished her body while the Baby napped and the girls watched a DVD. I originally planned to make a permanent dress type body, but I wanted her to have something special so I decided to make a plain body and then make a reversible dress for it.
*
Reversible dress? What was I thinking?! For such a simple design, without a pattern mind you, although I did look for one on the 'net but found nothing I liked, it took me a while to figure it out. I had to take a break and go outside for a bit to clear my head and think it through. Turned out better than I hoped, and I like that she has "two" outfits to wear but won't ever lose one or the other. 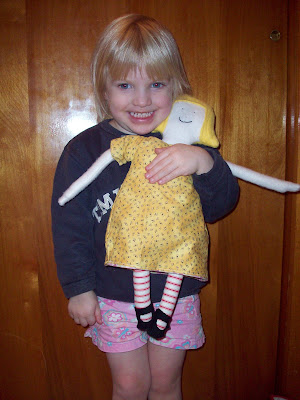 The happy birthday girl with her new dolly, named: Dolly. Of course.

The reverse side of the dress is the purple diamond fabric you see in the first picture behind the head.

I'm gearing up to make another one soon for Middle, whose birthday is next week. Hopefully, making the reversible dress will go easier for me this time, now that I have one under my belt already.
Posted by jenny at 11:16 PM

your description of your kids toys was so similar to ours that i cringed while reading it.

Your blog header photo took my breath away! Dolly is pretty! You are SUCH a good mummy. I got my first copy of my book today. A signed copy will be on its way to you by the end of the month to say thank you for all the recipes you freely gave me in 2008. xo

Karl-- The kids play so much better now that we have gotten rid of so many toys. Less really IS more!

Dj-- *gasp!* YOur book is in print!! Yay!! I'm so so excited for you! Looking forward to getting my very on autographed copy! Thank you so very much for your generousity!

That header picture is something else, isn't it? It's right outside my bedroom window and when I saw it, I hoped I could capture it in picture! GLad you like it and Dolly, too.

Good Mommie! It's lovely! I remember the all night pursuit of the perfect gift...

I LOVE the new photograph at the top! Wow!!!!