The county had an event over the weekend which celebrated the county's heritage. Hampshire County was established 253 years ago in 1754 and is the oldest county in the state. George Washington surveyed the area when he was 16 years old. The county invited people from all over to re-enact life in the 1700's which also included civil war period style of dress, craftsmanship and a civil war battle scene played out down by the river. People who lived in homes built in the 1800's also opened their doors to the public so people could come in and tour the old homes and some even furnished their homes in period furniture. It was a fun weekend and we all learned so much!

When we first got there, we went to an area that was marked 'Colonial Hampshire' and inside and outside were all manner of people dressed in colonial style clothing doing arts and crafts of the period. There was a man that made furniture by hand and he has many of his works on display at Mount Vernon in George Washington's home. He took the time to explain the tools he used and had much of his work for sale. Beautiful hand-carved chairs, benches and tables. The girls fell in love with a child-sized rocking chair, but the price was wayyyyy out of our range (and rightly so!). There was also a couple that made lace by hand and they were so delicate and beautiful. It takes an hour just to make an inch of lace! The girls enjoyed watching them weave their threads to make the lace and we stayed about 15 minutes just watching them in action. Moving on, there was also a display of women spinning wool into thread and then also rug hooking wool strips into pictures and rugs. I was delighted to see this because this has been something I've wanted to try and I could ask my questions: How? What? Where do you get it? What do you use? Thankfully, the woman spinning the wool was entertaining the girls and I was able to talk with another lady about rug hooking. There were also Indians since there were lots of Indians here in Colonial times, but the girls seemed wary of all the war paint and Indian garb they wore, so we didn't stop to talk and ask questions. Maybe next year when Middle doesn't cower behind my legs. 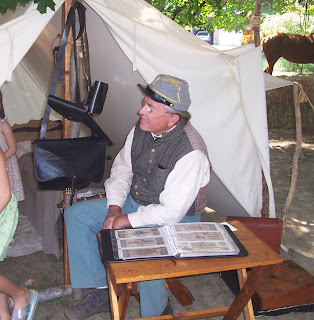 Here, there were some civil war re-enactors and this gentleman above was a very friendly chap that let the girls go into his tent and check out his "home". He slept on a rope cot and had all his belongings in a trunk by the bed. He was a Civil War Paymaster and asked the girls if they wanted to "sign up and join the army?" Oldest and Middle said yes, so he asked them all sorts of questions and one was,"Are you over 18?" Oldest shook her head no. At this, he reached into his traveling desktop and pulled out a paper with the number 18 on it. He told her to step on it and then asked again. "Are you over 18?" He said this was a ploy that many underage kids used to join the army and when asked, they could truthfully say that they were indeed, over 18. He then told the girls that when they join, they get $22 sign-up pay and to report for duty at 3 am! The paymaster called over to the next tent and told him he had 2 new recruits! He gave the girls copies of money that was used and said if they found a place that still took that money, to let him know as he had a lot of it to spend! :0) 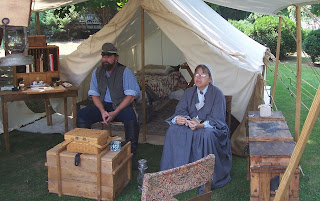 Guess who was in the next tent? General Stonewall Jackson and his wife! Their tent was much more fancier with a rug and two cots and minor furnishings. Mrs. Jackson was working on a crocheted doily and the General talked and answered questions. 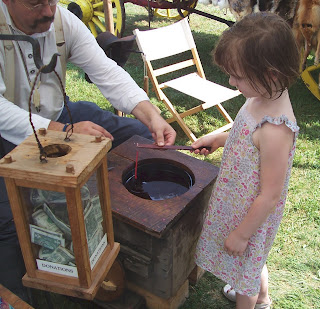 Over in the kids' activities area, the girls had a chance to make candles! It was a long process, dipping a wick first in a vat of wax, then in a can of cold water. Back and forth, dip in wax, dip in water, dip in wax, dip in water. Finally, the candle was big enough and the candle man snipped off the bottom and sent Oldest on her way. Next to him was a man that dripped ink onto a thick water and wheat bath and then swirled designs in the ink. He asked the girls to pick ink colors and paper colors and then they had their own ink design on paper. I plan to turn the paper into a cover for a little book for the girls. I wanted to shove the man aside and make my own papers and really had to restrain myself! 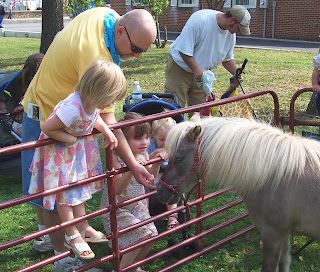 There were also a few farm animals scattered here and there, miniature horses the girls could pet, alpacas with people demonstrating how to turn their wool into soft clothes and slippers, and a blacksmith showing how to make horseshoes and shoeing the horses. There were basket-weavers, ale-makers, hunters displaying hides and rifles, and so much to see and do! We went both Saturday and Sunday and we didn't see it all! Definitely something we will return to next year!

This sounded so interesting. Esp that bit about being over 18,how clever! Almost time to go get N3S from his first half day at school, can't wait. Hey, we live in Hampshire county too, just on the other side of the world from you.

Good girls they told the truth about their age. :) You've taught them well.

Can I say that they are SO cute without sounding creepy please? Because they are SO cute in their little dresses!! If I ever have a little girl I hope she likes dresses just so I can take way cute pictures.

That looks like so much fun and was also quite educational!

(BTW, that song that you asked about on my blog is called Numb and is by Linkin Park.)

Dj-- It was a fun day for us and I was sort of sad to see it end. I wish it was for a week instead of 2 days, but it gives us something to look forward to for next year, I suppose. Heyyy-- what a coincidence, the two of us living in Hampshire county... too bad they arent one and the same!

Lindy-- No you aren't creepy!! I think they're SO cute too!! :o) It is very rare to see Middle in something other than a dress. Oldest used to be a dress-only sort of girl, but she is switching to jeans now and then. Youngest wears what I put on her.

Dana-- It was great! I meant to respond to your earlier comment about Linkin Park but I haven't gotten around to it yet. Thanks for the info. I'll see if Hubby would be interested in getting the CD and then we can share it.