Living in West Virginia means yard sales and flea markets taper off in October.  There might be one or two odd yard sales here or there, but it's pretty much done with by then.  So I rely on auctions and thrift stores for my treasure-hunting fix. I was looking forward to an estate auction back in December, but it got snowed out and postponed all the way to April! It's been weeks since I've found anything good at the thrift stores, just little items now and then, but nothing big that fills up my car and makes me do a happy dance like a football player doing the touchdown boogie!

Finally, an auction was advertised in our local paper and it wasn't too far.  Let's go, let's go, I plead with my husband!  I don't have to beg too hard, he wants to go, too! 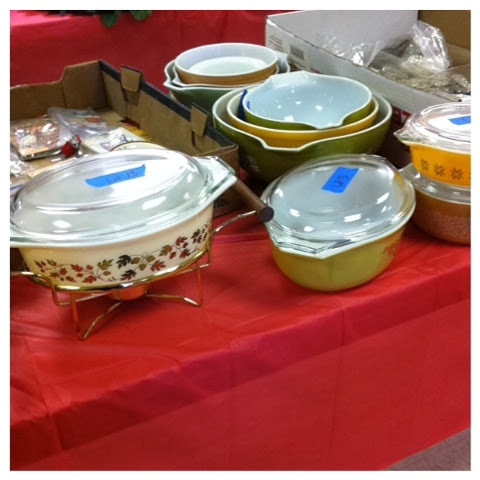 There were some old toy cars and a bunch of Pyrex we had our eyes on and maybe a few other things if the price didn't go too high. It was held at a fire station and the turnout was pretty good.  I think other people are wishing for yard sale season to start up again, too! After the tools and outdoor stuff was over with, a lot of people left, so I thought I had a pretty good chance getting what we wanted, but here's where I learned something new: This was a consignment auction.  So what does that mean? It means that unlike an estate sale where the auction company can't be bothered to auction off every little item and instead group things into lots and you get the whole box for one low price, a consignment auction is someone using the auction company to sell an item for them and most times, it has a reserve price. And stuff that I thought were being sold in lots because they were grouped in a box? Wrong! It was just easier for the helpers to bring them to the front and then hold up every single item to be bid on.

Holy cow!!  That auction took forever!! It was moving swiftly and yet slowly because of the amount of items to be auctioned off.  Thank goodness for iphones to play on! They finally got to the section where the small goods were located at, but it was still a long way off before they reached the cars and Pyrex.  Cars went for way more than we were willing to pay, unfortunately. I finally went up to one of the helpers and asked them to do the Pyrex stuff next, because we needed to get back home to the kids.  I figured we would have been home by 4 and it was already 5!! Thankfully, the guy was happy to do so and after 5 hours at the auction, all we came home with was the two Pyrex dishes below. 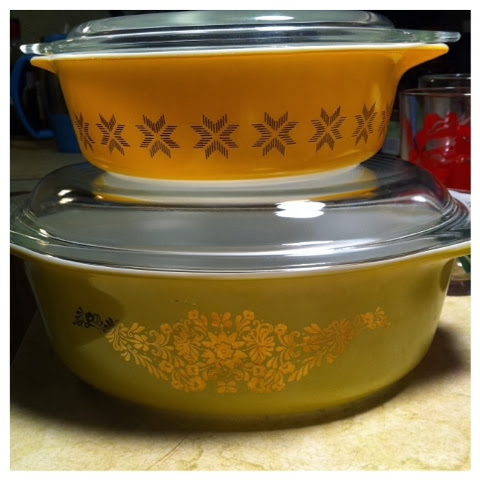 I'm happy with them.  They are in pristine condition and I paid far less than if I had gotten them online or even at my local thrift stores. I don't think we'll go to a consignment auction again, now that we know what we know now.  I'll stick to estate auctions, but hey, I got my fix and something to show for it, right?!

In other news, I've been selling things on my Instagram account, @516vintage and I am doing really well there.  So well in fact, I am making more than I make in the booth! At this rate, keeping the booth is making less and less sense so I put up 20% sale signs in the booth the last time I went in to restock and hopefully I can clear out at least half of it and then close it out at the end of February. The booth was fun, and I don't regret it. Now I know what it takes and I can say I've done it and no more wondering about it. Time to move on and pursue other avenues! Feel free to check out my Instagram shop and if there;s something you like, you can purchase it via paypal. Or just come by and say "hi!" I post pictures of other things besides sale stuff, so it's not all about selling things.