Having 3 older sisters means there's lots of pink girly stuff around here. Poor Peter. He doesn't seem to mind too much, as he plays with a little bit of everything, and the girls don't have all girly toys. There's plenty of gender-neutral toys to play with around here. Plus it helps to have a papa that likes toy cars, so there's definitely lots of those for Peter to claim as his own.
Peter likes a certain set of cars, always playing with those and screaming his little head off when one of his sisters take one away. He is using the front of his shirt as a carryall and that just won't do! I gave him a basket, but that gets turned into a hat or thrown at one of his sisters. I tried a small plastic bin which gets turned into a step for reaching higher-up stuff he isn't supposed to get into. Plastic bags are out-- suffocation risks. So I had to come up with something-- his sisters all have bags made by me, in flowery or satin-y fabrics, so why not make something for him?
I came up with: 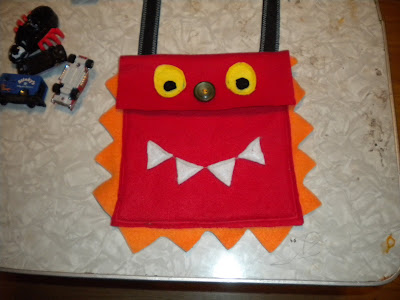 A monster bag!! He loves monsters and dinosaurs so it seemed natural to make something with scales and pointy teeth! 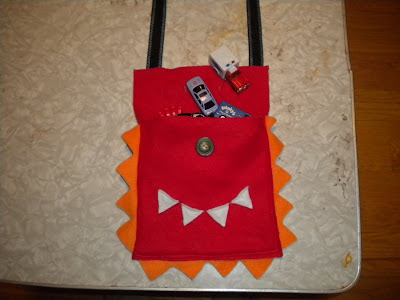 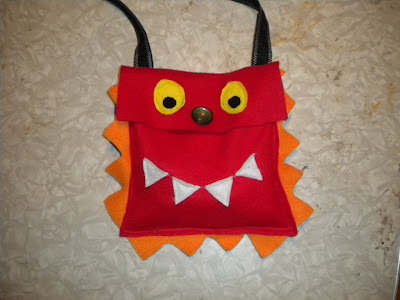 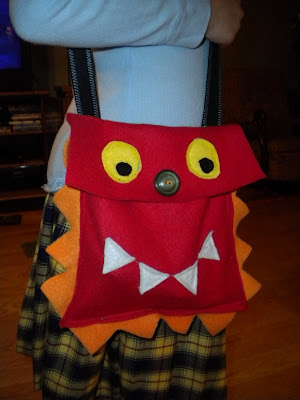 A cute bag for a cute little boy! He refused to pose for me, so I asked big sister Evelyn to model the bag for me. I am thinking of making a few more for other little boys I know!

That is so cute and what a great idea for a little boy.