I never really knew my Grandmother. She lived in Minnesota and we lived in Illinois, Louisiana, and finally, Virginia when she died. The relationship between my Grandmother and my Mom was strained to say the least, so I think we only saw her once a year, if at all.

She lived in a 4-room house. Water had to be pumped from the well and then heated on the stove. Bare light bulbs dangled from wires that were strapped to the ceiling, along the wall and out to the power box. Clothes were washed in an old wringer-style washer and then hung on the line out back. An outhouse had 3 sizes of holes to go potty in-- small ass, medium ass, large ass. I tried to sit on the medium size hole when I was little and quickly found out I needed to keep my ass on the small size. Dirt cellar under the house; I only went down there once and still remember that dank, earthy scent. Attic had a few things in there, but had that distinctive bat smell. No matter how hard my Grandmother tried, she never could completely eradicate the bats. Her bedroom was pink. There were horses in the field behind the house and I fed them crab apples. She used to make crab apple jelly with those apples.

Grandmother's favorite flower was the Tiger Lily. She had them all around the house and I remember them, thinking they were strange looking flowers. When she died, my Mom tucked some tiger lilies in her hands. My Aunt transplanted some of the tiger lilies from around my Grandmother's house and planted them in her back yard. A couple of years ago, she asked me if I wanted some seeds from the tiger lilies. I only had a few that sprouted last year, and a few more sprouted this year than last. It's kind of cool knowing I have descendants of tiger lilies that are over 60 years old. 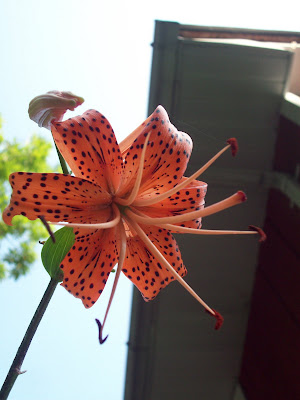 The flowers hang down. I wish they bloomed upright, but maybe they are shy flowers. Or maybe they bloom this way so that the rain doesn't fill them if they were upright, like a cup. Strange flowers, bold orange and spotted, bumpy black, but then maybe they are ashamed to have such bright colors, so they try and hide their blooms, to fit in with the other flowers. Maybe that's why my Grandmother liked tiger lilies.
-
My Grandmother told me once, not too long before she died, that I ought to be ashamed of myself. We were sleeping overnight and she came down the stairs, restless in the middle of the night, and turned on the hall light, it woke me from my cot in the dining room, the light shining in my eyes and she looked at me and told me, "You ought to be ashamed of yourself." Then she turned off the light and went back up the stairs.
-
For the longest time after that, I wondered what I did to make her say that. I was 12 or so at the time and it stunned me. When she died, I wasn't sad. I never really knew her. She was old school-- children should be seen and not heard. She had a hairy, scratchy lip when she kissed me and she had that old-people smell. I don't remember much more than that about her.
-
At the memorial service, I was more interested in the dead baby in the other room than I was in my Grandmother. I remember watching my Mom put the tiger lilies in her hands. They were stiff and curled, and when she picked up her hand, the whole arm lifted. I touched her face and it was cold and hard, and surprisingly, soft and smooth. I didn't know what to think. She was dead, what was it to me?
-
As an adult, looking back, I know now that when she told me those words, late at night, in the dim light, with her spotty medicine-fogged mind, I might have looked like someone else. With all I know about her now, she had a hard life and she tried to do what she could to single-handedly raise 2 daughters on a very small income. She was deaf herself and had to deal with an over-bearing mother who mooched on her and put her down and wrote to potential employers not to hire her daughter, which made it harder for her to find work. Days back then were not easy for rural women, especially widowed, rural, deaf women with 2 young deaf children. I forgive her for those words now.
-
Her last years were not easy ones, with open heart surgeries and medications that left her ill and stole her mind and robbed her of her memories. I think if she had heart surgery now, her recovery would have been better, but 20 years ago, things were not as advanced as they are now. But it was not her health that did her in, she took her own life. A decision that has devastated my Mom and I think, still has her searching for answers. As someone looking in from the outside, I believe I know why she did it, but nothing I can say would soothe or ease her pain.
-
So, my Grandmother's tiger lilies live on. And I hope they know they have nothing to be ashamed of. 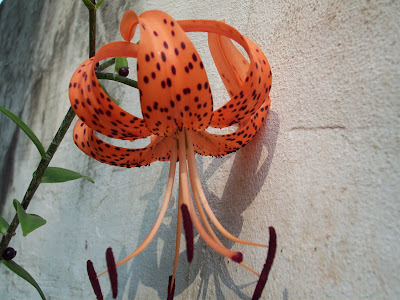 beautiful post, really. I remember you telling me this story. I also love the way you tied it into the tiger lilies.

Sometimes I know we're so busy living our lives... that we forget our grandparents were our age once. I often wonder what they really thought and how they deal with it. And some of them are alone in their golden years (my grandmother) ..... I know I try to build more of a relationship with my grandmother when I see her. I ASK her what it was like. What she dreamed of and what it was like. She enjoys telling me some of the stories and I honestly do pay attention and appreciate it. And I do have my kids around and show them that we should take time to be with her. They play Dominoes ( PR game) with her and all sorts of stuff. They do enjoy it.

Someday my kids and grand-kids will be off in all four corners of the world.... but I pray that I raise my kids well and build/respect a relationship with them and their kids. I want them around me when I'm in my golden years.
And the tiger lilies are pretty. I love the colors. God paints his flowers so pretty. Just have to take the time to admire them.

Wow, what a nice tribute to your grandmother. Even with all her faults, she made do with her life as it was given to her and she triumphed... or you would not be here, blogging away, sharing the wisdom tidbits with us. :-)

Lovely Tiger Lilies... I kept and still keep my distance from them, because for some reasons, they attract wasps...

You really painted a clear picture, that reminded me of my own grandparents in many ways. I find myself sometimes mulling over their mysterious ways, trying to imagine why they were the way they were sometimes.

Nowadays, I tell my daughter that adults are really just grown up kids. We don't always have it all figured out and we certainly aren't infallible!

What a beautiful post and what a great tribute to your grandmother! Thank you for sharing with us.

BlueMeya-- Thanks sweets. And yes, I agree, everyone needs to have a good relationship with their grandparents, there's much we can learn from them. Makes me glad my mom is here with us, so the kids can get to know her.

Karen-- thank you. I wish she was still alive today so I could pick her brain about her canning practices. She didn't pass on any knowledge of that to her kids.

Ron-- My Grandmother was also tight-lipped about the past. Mom tells me whenever she asked about her daddy, my Grandmother would tell her to "mind her own business." Too bad she thought that way, now that she is gone, my Mom has no one to ask about her father.

You're right about adults being grown up kids!! When I worked at the post office, I never could shake the feeling that I was back in high school again-- the supervisors were the teachers and the workers were the students.

Thanks for sharing. Very intimate and matter of fact in the same breath. It made me feel like I was looking through a dirty basement window into someones life.

What a lovely tribute to your grandmother. I'm particularly impressed that you've come to terms with some of the hurt that you carried with you.

The flowers are beautiful, even in their bashfulness ;).

That was really beautiful. Seriously.

What a great post Jenny! It takes so long for us to "grow up" and realize what our elders went through, and often times it is too late to say anything to mend hurt feelings.

Who would've thought that over time and miles your grandmother's Tiger Lily would now be blooming your garden, from seeds you planted. I am sure she is very proud of you!

Karl-- I like the way you put it--"looking through a dirty basement window into someones life". Thanks for reading. :o)

Wendy-- Thank you. I've long since learned that I can't hold onto things or they'll fester and boil. Try to understand both point of views the best I can and then move on. They are lovely flowers, I look forward to when they bloom every year!

Trapper-- Thank you. I'm not so sure she'd be proud of me-- she really didn't want to pass on any knowledge of canning to my mom and her sister. She always told them not to marry a farmer, that the life was too hard. And here, I am trying hard to go back to a down to earth existence. She'd probably ask me why when it's easier to just buy at the store. But then again, maybe not. She's an enigma in some ways for me. She'd had a hard life, so I imagine she just wanted more for her girls.

If we ever move, the lilies are coming with me! :o)