A few weeks ago, I was searching online for hatcheries that would let me order less than the minimum 25 chicks. I found a few for "backyard" farmers, but many would not be ready until much later than I wanted. Lo and behold, a flyer came in our local paper advertising chicks coming to their stores. The closest store is about 35 miles away-- I was willing to drive to pick up chicks. Upon checking their website, they said they would have several varieties available, in straight runs or pullets only and the minimum purchase was 6-- perfect!

I had my husband call 3 different times to verify the date when they would have the chicks-- each time was March 28th. Andrew was starting to get a little irritated with me and my obsession with the chicks (sorry, honey!). We got up early Sunday morning because I had every intention of being there when their doors opened so I could get first pick of the chicks. We walked in and I asked Andrew if he could hear peeping and we'd follow the sounds. No peeping. We asked the cashier where the chicks were and she said they'd be here tomorrow, the post office is closed on Sunday. Wtf?!?!?!? We weren't mad at her, but we were mad. I had no words to say and walked out. Andrew said a few things to the cashier about getting their information straight and walked out. What a wasted trip that was.

Monday morning, we woke up early again, but before we left, we called first to make sure the chicks were there. They were. Once we got there, I was disappointed-- there were only ducklings and two breeds of chicks: Rhode Island Reds and New Hampshire Reds, and they were straight run-- not even separated by sex. What happened to all the other breeds?? The White Rocks and the Black Australorps I had my heart set on? The girl there had no answers for me.

With a big sigh, I picked out what I think are 5 each of the Rhode Island and the New Hampshire Reds. I HOPE I'll have more pullets than roosters. I wanted 10 more hens to add to my laying flock, and now I'll probably be lucky if I have 5.

To say I am very disappointed is an understatement. I am happy to have my chicks, but they were not exactly what I wanted. When I called once myself via relay to confirm when the chicks would be there, the guy hung up on me because he thought the relay operator was selling something and he was not allowed to take "those kinds of calls". It is very frustrating as a deaf person to have to rely on someone else to make calls for them, and when there is a service I can use, like the relay service, to help me be independent, it's infuriating when people hang up, not understanding how the relay works. Add to that, incompetent people who are not informed of proper dates or because management isn't communicating the right information, it just all adds up to a very upsetting time.

I have every intention of calling the company's headquarters, but again, I have to rely on Andrew to make the call or risk getting hung up on if I use the relay services.

On the bright side of things, I do have my chicks, even if they aren't exactly what I wanted. 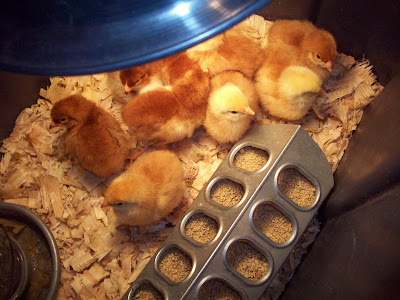 They sure are cute little, fluffy things, aren't they?? My current battle now is fending off 4 little ones that want nothing more but to hug 'em and squeeze 'em and kiss 'em and love 'em and hold 'em and hug 'em some more!

Been there, honey. Your article is right on and should be sent to both the store and to the distributor or corporate office by registered mail.

The phone system is too iffy even for hearing people with its countless phone menus and being handed off to people who don't know what to do.

Sometimes you get satisfaction by being given the red carpet treatment at the next sale or a free product, but if you educate somebody, it's golden.

I would put your thoughts down in a letter of complaint! A telephone conversation is easier to ignore than something written in Black and White.

It's really shoddy that you were treated like that and the fact that the guy hung up on the relay system is just plain discrimination!! Don't let them away with it....as Dianrez says, education is golden!

Ps. The wee chicks are lovely!!

Well. That sucks. Sorry nothing seemed to work out right with the chick adventure.

But you got cute chicks! ;)