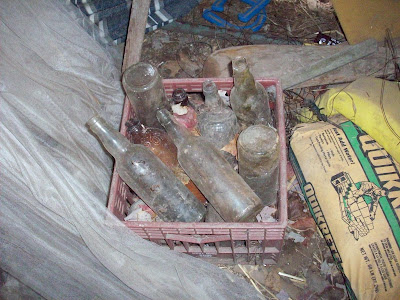 Buried treasure: old glass bottles, 1951-62 (based on outline lettering from the Clorox bottle)

The thing that's really nice about old glass is that it can survive. It can be a fickle thing, shattering on impact, but sometimes, if it's lucky, it can be tossed into a pile of trash, covered with dirt and then some years later, be discovered and dug up to be used for something else. 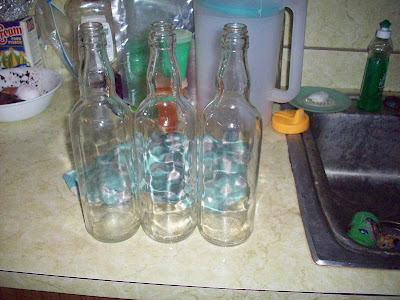 After a good soak and washing, these old bottles are as good as new again! They are four-fifth of a liter so I am assuming they were once used for some sort of alcohol. Beer? Liquor? 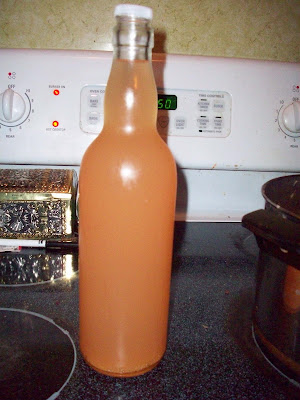 They are now a vessel for my peach wine, which is quite tasty by the way. I have gone through every single cap in the house to see if any fits, and wouldn't you know? The only one that fits is from another alcoholic beverage bottle! I am using a water bottle cap, which almost fits, and then plastic wrap over it, secured with a rubber band. I have 4 of these filled right now and another 2 gallons of peach wine to divide into smaller bottles.

It's snowing now, and this is just the thing to keep me warm while we play in the snow! :o)

-
By the way, I still have 2 fleece puzzles left and if mailed priority by Monday, they should arrive in time for Christmas, so if you want one, send me an email with "Puzzle" in the header. cattyjenny@aol.com Check a couple posts down for more info.

That wine looks lush but I came over to look at your gingerbread house post so that's where I'm going now. xo

Off of the point.. finally I am seeing a photo of snow covered road of your blogsite... beautiful!